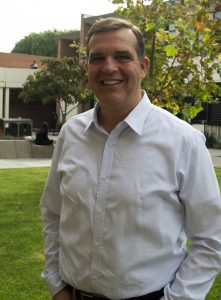 Todd Henneman’s students know him by his big smile and contagious laughter. What they might not know is that he’s a multi-talented journalist with several years of experience across different media. That might explain why he teaches everything from basic media writing classes to multimedia seminars and journalism history courses. He’s now in his 10th year teaching with the CSULB Journalism & Public Relations department.

What inspired you to become a journalist?

Henneman: Thinking back, I always liked journalism. I started a little family newspaper on my typewriter when I was in second grade. I wrote a movie review, then wrote about our upcoming family vacations. I did the family newspaper for years; it slowly grew from my immediate family to my extended family. There was something about feeling like I was informing people and giving them information that was helping them with their lives that I really liked. So, I basically have been involved with different forms of journalism most of my life. In high school, the classes that I was taking prevented me from being part of the traditional student newspaper. So, I started a video journalism club, so I could do some form of storytelling.

What brought you to California?

Henneman: When I graduated from college, I interviewed for different jobs. I had three job offers. One was in South Carolina, one was in Iowa and one was in California. I thought, of those three places, where would I be most excited about living? Hands down, the answer was California. I accepted the job in the northern part of San Diego, and I never left.

You are one of the advisers for the CSULB chapter of National Association of Black Journalists. How did you become the advisor for NABJ?

Henneman: I always been drawn to social justice and the importance of inclusion. I was helping two students in my Journalism 120 class find resources for a story they were doing about the Black Lives Matters movement. They were having a hard time getting their calls returned, and I found out about an event that was being held by the NABJ chapter in Los Angeles, where some members of the Black Lives Matter movement were going to be. They came back really enthusiastic about starting a chapter of NABJ at CSULB. Unfortunately, we didn’t have any black faculty members at the time. They were talking to me about how to find an adviser, and one of them asked me if I wanted to do it. I told them that they should ask all the students involved if they were OK with it, and it just went from there. I have friends who got a lot out of being in NABJ, and I have been involved in many professional associations myself, so I know the value of being involved in an association. I am happy to be the adviser. Though I am an imperfect adviser, I am better than nothing.

What kinds of events do you do with NABJ?

Henneman: One of the events we did in the spring semester was a behind-the-scenes tour at NBC-4. Beverly White, a reporter there, took a group of NABJ members from our chapter on a tour of the facilities, so students interested in broadcast journalism could get a sense of what it is like to work at a major market.

What kind of advice do you give your students about starting a journalism career?

Henneman: One piece of advice I have for students, if they’re freshmen or sophomores, is to have at least three internships by the time they graduate. If you’re waiting until your senior year, you need to know that you will be going for jobs against people who have had tons of internship experience. It’s important to start thinking about internships sooner than I think a lot of students are. Also, I think it’s important to pick your classes strategically. There are classes that you have to take for your degree, but also think about which classes will help you in the specific area of journalism or public relations that you are interested in.