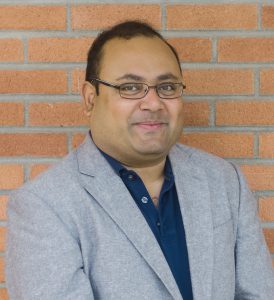 Dr. Soumitro Sen is a former public relations professional and print journalist.  His research projects of late have explored the influence of culture on crisis communication, examining in particular, how organizations/entities are influenced by their internal and external cultures when responding to a crisis situation.

Dr. Sen received his Ph.D. in communication from Purdue and his master’s degree in journalism from the University of Nevada, Reno. He holds bachelor’s and master’s degrees in English from Jadavpur University in his hometown of Kolkata (formerly Calcutta), India.

When not engaged in academic work, Dr. Sen loves to write poetry. A number of his poems have appeared in Brushfire, Nevada’s oldest arts and literary journal, published by the University of Nevada, Reno. Dr. Sen is also a painter by hobby and has had two exhibitions of oil paintings at the Academy of Fine Arts in Kolkata.