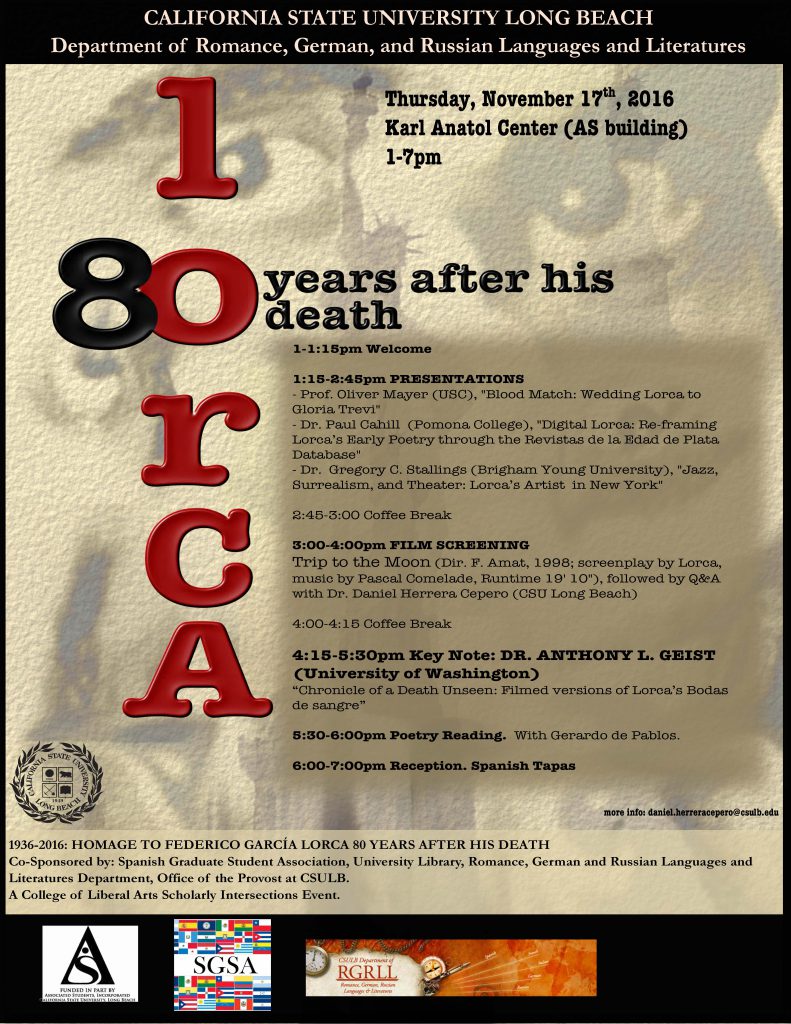 It is a pleasure to invite you to our “1936-2016: Homage to Federico García Lorca 80 Years After his Death”. The conference is organized by the Department of Romance, German, and Russian Languages and Literatures from the California State University, Long Beach and will take place in the Anatol Center on November 17th, 2016.

Federico García Lorca (1898-1936) is, together with Cervantes, the most studied and internationally recognized and influential Spanish author. Lorca is very well known as a poet and dramatist, but he was also a musician, a draughtsman, an actor, and also authored a film script. Lorca traveled to New York in 1929-1930 getting in touch with Harlem Renaissance authors such as Nella Larsen. He was also influenced by jazz, by the poetry of Walt Whitman, as well as by Mexican Avant-Garde artists such as Emilio Amero, among others. After his stay in New York, he travelled also to Cuba, and in the 30’s he became a celebrity in Argentina and Uruguay. His art combines the most atavistic and traditional influences from Andalusian folklore with the most daring avant-garde techniques; freedom of expression and social commitment fuse in his works in an unprecedented way.

Lorca’s assassination by Francoist fascist authorities took place at the very beginning of the Spanish Civil War in 1936 and set the note of brutality that, sadly, would be held in Spain in the following years. The history of Lorca’s assassination has still today many gaps that remain unexplained. His remains are still lost in one of the more than 2000 common graves that hold nearly 150000 unidentified bodies of victims of one of the most terrible fratricidal wars in History.

Lorca has become more than an author. He is a symbol of freedom of expression and a very important figure for the gay rights, and anti-war movements in the 20th Century. Many cities and institutions worldwide are commemorating this sad anniversary with cultural and literary events.

For any inquiries regarding the conference, please contact: Daniel.HerreraCepero@csulb.edu

We look forward to seeing you at Long Beach.

Chair of the Organizing Committee