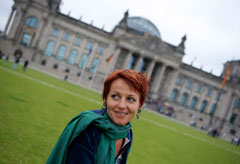 Dr. Laura Ceia specializes primarily in turn-of-the-twentieth-century French Literature and History of Ideas, as well as contemporary French Cinema. Trained as comparatist, her research interests also include Eastern-European literature and cinema, and contemporary European trans-national cinemas. Her work places a particular emphasis on the intersection between politics and aesthetics, and the role of artifacts (such as literature and cinema) in informing, reshaping or distorting cultural perceptions of citizenship, nationality and identity. Before joining the RGRLL Department at CSULB, Dr. Laura Ceia has taught courses in French and Film Studies at Massachusetts Institute of Technology and Boston University.