5 Students in the German MA program moving up

Dionne Agawu received her BA from Bryn Mawr College in 2017 in German and Anthropology. There she served as class co-president and German major representative. In 2018 she began her MA in German Studies at California State University, Long Beach, where she has taught beginning and intermediate German classes. She also served on the conference organizing committee for the CSULB German Studies conference “Writing Revolutions: German Paradigms and Legacies of Resistance” in 2019. Upon completion of her Master’s degree, she will depart for Klagenfurt, Austria to work as a US Teaching Assistant with the Austrian Fulbright program before attending law school to pursue a career in diplomacy.

Luke Beller received his BA in Classics at CSULB in 2015, and will receive his MA in German Studies in Spring 2020. He has delivered two academic conference papers at CSULB with a third coming this spring, a fourth to take place at the German Studies Association in the fall, and is currently working toward the publication of his first academic article on the philosophical correspondence between Friedrich Schiller and Christian Gottfried Körner. His interests include the intersections between German Enlightenment philosophy and Ancient Greek thought, German literature from the eighteenth to twentieth century, and the political traditions of Germany and the USA. He has been the Vice President of the German Studies Student Association, and is currently the Secretary of the College of Liberal Arts Student Council. He is also a Teaching Associate at CSULB and has taught four sections of Intermediate German. In recognition of his accomplishments in and outside of the classroom, he has received multiple departmental scholarships, the departmental Outstanding Teaching Associate Award for German (2018-2019), and an internship at the German Literature Archive in Marbach. Looking forward, he plans to begin studies in a PhD program this coming academic year.

Elaine Chen received her BA in German Studies and Women’s, Gender, and Sexuality Studies from California State University, Long Beach. After graduation, Elaine worked as an assistant director at the Schauspielhaus Salzburg theater and was awarded a stipend for the Nationaltheater Mannheim’s annual Schiller Days festival. In Fall 2017, she returned to CSULB to begin an MA in German Studies, where she co-taught a course on German Social Drama with Professor Jeffrey L. High, with whom she also co-wrote and directed an adaptation of Schiller’s “The Criminal of Lost Honor.” From 2018-2019 she was a Fulbright Combined Grantee in Salzburg, Austria, where she taught English, attended classes at the University of Salzburg, interned at the Schauspielhaus Salzburg and the Salzburg Theater Festival, and conducted research on the influence of Kleist’s novellas and suicide on Thomas Mann and Stefan Zweig. Upon returning to California, she directed Lessing’s Emilia Galotti for CSULB’s student-run

Theatre Threshold, and co-directed an adaptation of Büchner’s Dantons Death with the students in their class on German Social Drama. She will graduate in Spring 2020 with a thesis on Mann and Zweig’s literary interpretations of Kleist’s novellas and suicide.

Glen Gray is currently pursuing an M.A. in German Studies at CSULB. He received a B.A. in German Studies and a B.M. in Music Composition from California State University, Long Beach (CSULB) in 2017. That same year, he presented a paper on Hans Werner Henze’s Opera Der Prinz von Homburg at the 52nd Annual CSULB Comparative Literature Conference. In 2017-2018, he received a Fulbright Austria English Teaching Assistant position to teach in Vienna. He acted as musical director for the 2019 “German Art in SoCal-SoCal in German Art” conference at CSULB, where he curated and directed a musical program of the exile compositions of Kurt Weill and Hanns Eisler. He has premiered compositions at the 2016 conference “Drive-By Theatre Double Feature: Brecht+60/Kleist+205,” at the 2019 “Oh My Ears” music festival, and is a co-founder of the Los Angeles Electroacoustic Ensemble, which performed at the 2019 “Hear Now Festival,” and will present at the 2020 New Music Gathering in Portland. Glen was awarded a German Academic Exchange Commission grant to fund a research stay in Bonn, where he is writing his master’s thesis on operatic adaptations of Kleist’s drama Das Käthchen von Heilbronn. He plans to continue his academic pursuits in German and Music in a PhD program starting in Fall 2020.

Courtney Yamagiwa received her BAs in German Studies and Consumer Affairs from California State University, Long Beach in 2018 where she was recognized as the CLA Outstanding Baccalaureate Honoree and graduated with Phi Beta Kappa honors. In 2019 she was a recipient of the International Parliamentary Scholarship of the German Bundestag. Frau Yamagiwa has taught beginning and intermediate German at CSULB, and has worked as a Graduate Assistant for Professor Jeffrey L. High in University Honors Program courses on Heinrich von Kleist and Friedrich Schiller. Upon completing her Master’s Degree she will depart for Klagenfurt, Austria to serve as a US Teaching Assistant with the English Language Teaching Assistantship Program of the Austrian Ministry of Education, Science and Research administered by Fulbright Austria before attending law school to pursue a career in politics. 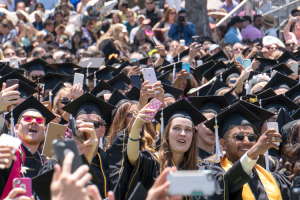