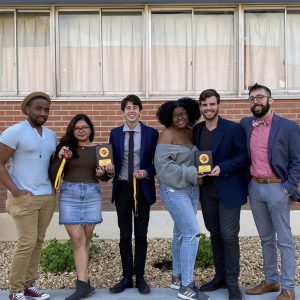 Beach Forensics has qualified two teams to the National Debate Tournament (NDT). For those unfamiliar, the NDT is akin to “March Madness,” or the NCAA Tournament for intercollegiate policy debate. CSU Long Beach has not qualified to this tournament since 2005, and the tournament is the nation’s most prestigious debate competition between the top 72 two-person teams across the United States.

The teams of Georgie Suico (freshman) / Noah Christiansen (freshman) and Jaysyn Green (senior) / Christian Vazquez (junior) will represent CSU Long Beach at “The Big Dance” next month. This is an incredible feat for each team: Suico and Christiansen are first-year college students; Green joined the debate team just 4 semesters ago after a short stint in competitive speech, and Vazquez joined the debate team last fall as a true rookie with no prior experience. They are attending a tournament that some competitors never qualify to, even after 4 years of high school experience and 4 years of college experience. This is a testament to the incredible talent our students have, the hard work they have put toward refining their arguments and honing their skills, and the outstanding leadership that Deven Cooper (our Director of Debate) has exhibited to re-establish Beach Forensics as a national powerhouse in intercollegiate policy debate.

The squad picked up victories over several schools in our district this weekend, including Southwestern College, CSU Fullerton, Arizona State, Fresno State, Fullerton College, and UNLV. In the qualifying division, Vazquez was the 11th ranked speaker; Christiansen was the 8th ranked speaker; Suico was the 6th ranked speaker, and Green was the 4th ranked speaker. In the rookie division (called the “Pacific Championship”), the team of Natalie Lahney and Cat Lucas-Castillo also picked up several victories, earning the 7th and 6th place speaker awards respectively.