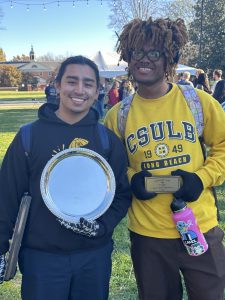 Beach Forensics ventured to Wake Forest this past weekend, where the squad competed at the Franklin R. Shirley Classic. This national tournament is regarded as the most prestigious, most competitive, and most important tournament of the fall semester. Schools are only allowed to bring their best 2 individual debate teams to this tournament, and the field this year had 124 of the nation’s top policy debate teams.

At the Shirley, the team of Diego Flores (Political Science, Junior) and Curtis Ortega (Film Studies, Freshman) finished preliminary debates as the 4th seed. Ortega was recognized as the 5th place individual speaker, and Flores won his THIRD 1st place individual speaker award of this semester, this time out-speaking 247 other competitors. The duo finished their incredible run in the semi-finals and took 3rd place overall, with victories over Missouri State, Central Oklahoma, Wichita State, George Mason, Wake Forest, USC, and Northwestern along the way.

Flores and Ortega are currently ranked as one of the top 10 individual 2-person debate teams in the nation, and are in the midst of making a historic run for CSULB. Stay tuned for more updates as Beach Forensics heads to the Big Tent Debates and Speech Fall Championships after Thanksgiving! We are thankful for your all of your support! GO BEACH!!!