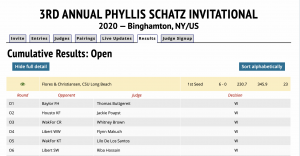 Beach Forensics concluded two consecutive weekends of competitive speech and debate tournament action with a strong start to the 2020-2021 season. On September 19, 20, and 21, Beach Forensics hosted the annual Jack Howe Memorial Invitational, one of the largest middle and high-school speech and debate tournaments in the nation. Adapting to the circumstances brought on by the pandemic, Beach Forensics hosted the tournament virtually, welcoming nearly 5,000 competitors and guests from more than 30 states, as well as Canada and China. The tournament went smoothly and was a resounding success, largely due to the incredible dedication and effort from members of Beach Forensics, the program’s graduate assistants, Director of Debate Deven Cooper, and Director of Speech Aaron Fullman. It was an important tournament weekend, since the virtual Jack Howe Memorial Invitational set the bar high for subsequent speech and debate competitions across the nation.

This past weekend, Beach Forensics policy debate team had its season opener at the 3rd Annual Phyllis Schatz Invitational, hosted by Binghamton University in Binghamton, New York. At the competition, the team of Noah Christiansen (Sophomore) and Diego Flores (Freshman) finished the preliminary debates undefeated, advancing to the elimination debates as the top seed. Christiansen and Flores advanced all the way to the Final Four, finishing in third place. Christiansen was also recognized as the 8th ranked speaker at the tournament, and this was Flores’ debut tournament as a member of Beach Forensics. The duo picked up victories over Baylor University, University of Houston, Liberty University, George Mason University, and Wake Forest throughout the competition. Beach Forensics plans to continue building momentum at their upcoming competitions, staying on course to qualify to the National Debate Tournament for a second consecutive season.

Beach Forensics is CSULB’s full-service competitive speech and debate team, open to all students, regardless of prior experience or major. For more information on Beach Forensics, please contact Aaron Fullman, Director of Speech, at Aaron.Fullman@CSULB.edu or Deven Cooper, Director of Debate, at Deven.Cooper@CSULB.edu. GO BEACH!