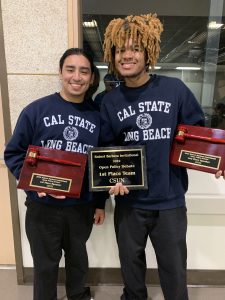 This past weekend, Beach Forensics split the squad and competed at two tournaments. 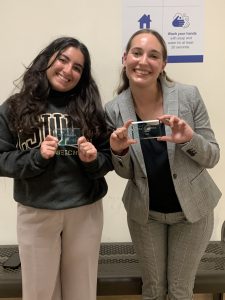 At the Crossman Invitational, hosted by El Camino College, Rhiannon Lewis (Senior, Communication Studies) took 2nd place in Open Dramatic Interpretation and Nikki Majidi (Freshman, Criminal Justice) was the tournament champion in Novice Persuasion. This was Lewis and Majidi’s debut tournament, and they made a big splash!

At the Robert Barbera Invitational, hosted by CSU Northridge, the Policy Debate team of Diego Flores (Junior, Political Science) and Curtis Ortega (Freshman, Film Studies) were the tournament champions in Open Policy Debate. The duo went undefeated and advanced to the elimination debates as the first seed. They won every elimination debate on a 3-0 decision. Flores and Ortega had numerous victories, including wins over Arizona State University, CSU Northridge, CSU Fullerton, and USC. In addition, Flores and Ortega were recognized as the top two individual speakers at the tournament, and Flores was the recipient of a $500 scholarship for earning the top overall speaker award. This marks Flores and Ortega’s second tournament championship of the semester, and the second tournament of the season where the duo were the top two overall speakers at a tournament.