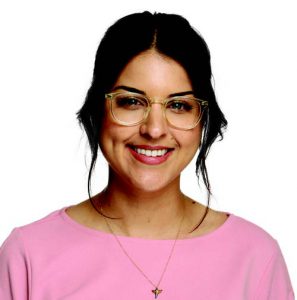 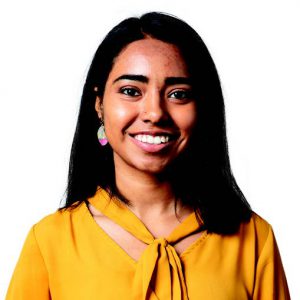 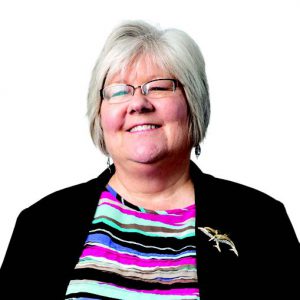 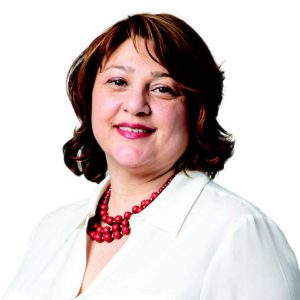 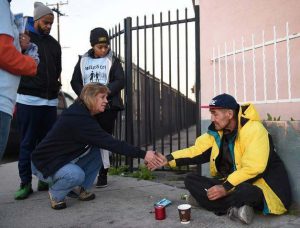 In this Jan. 26, 2016, file photo, Shari Weaver, regional coordinator for Harbor Interfaith shakes hands with a man as she and a group of volunteers in Long Beach counted the homeless population. (Photo by Brittany Murray, Press Telegram/SCNG)

People experiencing homelessness are much more likely to accept services if they feel they can trust outreach workers, a Cal State Long Beach study on homelessness found. That was one of the findings in “Meet Them Where They’re At,” a study by 26 students and two professors from Cal State Long Beach’s anthropology department, as part of a partnership with Councilwoman Suzie Price’s office (link to PDF file), to understand why some homeless people do not accept services or help. The professors who led the project, along with their students, shared the findings with the Long Beach City Council at its meeting on Tuesday, May 14.

“Research like this that can provide useful data to orient our future policy decisions,” Price said in a Friday, May 10, statement before the meeting, “and approaches to outreach could play a big role to increase the likelihood of getting people into service.” On average, it takes 17 contacts with an individual experiencing homelessness on the street to engage in services, according to the city. That number is partly what inspired Price’s office and the anthropology department to partner on the project in 2017, said Jack Cunningham, Price’s chief of staff. “I think viewing things from multiple viewpoints and disciplines is valuable,” he said last week. “There’s a lens from a social services perspective, but there are other ways of looking at it.” Anthropology department chairwoman Karen Quintiliani and department coordinator Mitra Baghdadi met with Price and spent three months working with the Homeless Services Outreach Team as pre-work before the study began. “There is a tremendous amount of work (in homeless outreach),” Quintiliani said Tuesday morning. “Changing human lives takes time and it takes people with certain qualities.”

Those qualities, she added, include compassion and respect for the homeless individuals they are trying to help. The students who participated enrolled in two classes. The first class trains students in methods for researching different people and cultures. In the second class, students studied articles and policy reports to contextualize homelessness. Quintiliani and Baghdadi, meanwhile, used their experiences with the city’s outreach teams to guide students for their own field work. Graduate and undergraduate students conducted research on the approaches that the Homeless Services Outreach Team, and other homeless outreach teams in the city, used during interactions with people experiencing homelessness. Students also interviewed people who were homeless — but now live in permanent housing – about services they did accept.

During Homeless Services’ outreach efforts in the field, students interviewed homeless people, asking questions to try to understand why some turn down services. “I think this helped our students very much,” Baghdadi said Tuesday morning. “To see in the real world how to use their education in a productive way, to be a responsible citizen. That’s our mission here, to help students realize that their education doesn’t end here in the classroom.” The experience left an impression on graduate student Thanh Nguyen, who conducted more than 40 interviews with people experiencing homelessness. “It was very enlightening for me,” he said Tuesday morning. “I had a lot of preconceived notions of homelessness and people experiencing homelessness, but after talking to them and learning about them, it really opened my eyes to how homelessness impacts people.” In total, students experienced nearly 500 homeless outreach interactions, that added up to about 450 hours total. “Just that density of data was really impressive to me,” Cunningham said. Another key finding in the study was that outreach workers were crucial in identifying, and helping, homeless individuals with hurdles to become eligible for services — such as getting an ID card, Quintiliani said. Sometimes, those hurdles included ending a relationship, or giving up a pet, she said. “This is very difficult work,” Quintiliani added. Quintiliani said she hopes the study will give the public a better understanding of how the process of connecting homeless people to services works, and the time it takes to see long-term impacts.