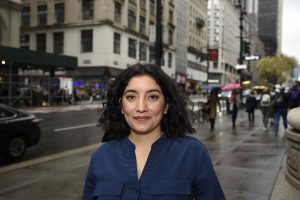 At CSULB, Ramos hopes to continue her research centered around immigration detention and pursue solidarity work between Latino studies and the fight against anti-Black racism in the classroom. She finds these conversations “really timely,” especially among her students.

“People were really thinking, especially now, with all of the social unrest happening in our country,” Dr. Ramos says. “It’s conversations inside the classroom. [They’re] very fruitful and very generative. Young people have a lot of ideas for how to make things happen.”

Ramos earned her bachelor’s degree in labor and industrial relations at Cornell University. After graduation, she returned to L.A. to serve her community as an environmental justice organizer. Soon, though, she was drawn back to New York to pursue her master’s in public health in urbanism and the built environment at Columbia University.

She is currently working toward her doctorate in philosophy at the City University of New York graduate center. She hopes to develop her dissertation into a book.

Ramos is no stranger to the classroom; she has taught at Lehman College and the New School in New York, as well as in the correctional setting, which, she says, has been the “most rewarding.”

She says she was drawn to CSULB as an Angeleno and an intellectual. While teaching in the CUNY system, Ramos was inspired by students who took a “nontraditional route” to get their degrees. She says she looks forward to learning from her students at CSULB.