In light of the recent protests and statements in support of Black Lives Matter and other anti-racist organizing efforts, the College of Liberal Arts is highlighting how its courses incorporate issues related to Black Lives Matter. We will highlight one course each month. You can view all of our courses here: https://cla.csulb.edu/black-lives-matter/

See the description below detailing how CLA faculty advance the anti-racist messaging of Black Lives Matter through assignments, readings, and pedagogical practices that affirm the lives, history, and culture of Black people across the globe. Descriptions fall into one of three categories—Long-Standing Practices, Recent Changes, and Future Plans—designed to demonstrate the ongoing nature of anti-racist efforts: 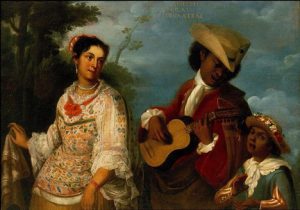 This survey of “Colonial Spanish-American Literature” focuses on topics, such as power and agency, inherent to written, imperialist discourse. In this graduate-level class, we become aware of how racialized bodies, particularly those of Black and Indigenous enslaved peoples, clash asymmetrically in what Mary Louis Pratt calls “the contact zone” (1993).

Cabeza de Vaca’s Naufragios (Shipwrecks, 1542) introduces us to Esteban (de Dorantes), which signals his status as “property” of the captain of the ill-fated ship, Andrés Dorantes. Cabeza de Vaca chronicles how Esteban became a lifeline to the survivors of the catastrophe, serving as their influential translator during their 8-year wanderings. Nearly a century later, Catalina de Erauso, a Basque nun-turned-soldier who transgressed early modern norms by dressing and living as a man in 16th C. Southern Cone region, tells her reader about a Black woman’s sexual advances toward her. While only a brief reference, the moment allows for a deeper discussion on racially inspired encounters in general. The course concludes by looking ahead to the 18th century, which gave rise to the pinturas de castas (“caste paintings”), which intended to create a sort of racial taxonomy (and to impose social “order” due to what Susan Deans-Smith calls “racial porosity” [170]) as a result of 200+ years of Spanish, Indigenous and African miscegenation. Indeed, they helped forge new identities in—and the new “identity” of— New Spain. In sum, the readings, including those of castas paintings, help students contextualize the race dynamics that have shaped Spanish-America and beyond.