Jeff Ogle thinks it is important to question yourself every single day.

However, he didn’t necessarily feel that way until his grandfather passed away in 2009. His death struck a very deep cord with Ogle. It got him thinking. 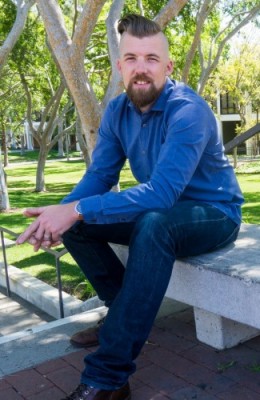 “I wanted see how much I could really question myself and question things in the world,” said Ogle, a 29-year-old International Studies major and Global Studies Fellow at CSULB, who will be graduating this month. “That way of thinking really opened up a lot of related discussions. I look at the United States’ involvement with other countries, then really look at the facts, and question what it means to be an American. What does it mean for someone to have American values? Who am I?” All good questions.Jeff Ogle (Photo by Kevin Tran)

Out of high school, Ogle entered Orange Coast College but, by his own admission, it was a time when getting a higher education didn’t hold any value to him. It was more important for him to have a job and make money.

“I had a very different ego 10 years ago,” admitted Ogle, who worked in the auto industry as a technical support analyst for classic cars for eight years. “I would say I was ignorant, a bit selfish and naïve to a lot of things going on in my community and around the world. I knew I had to change my way of thinking.”

His travels and studies in Spain, Germany and Costa Rica changed him profoundly. So much so, in fact, that one of his great concerns of late has been immigration, more specifically the plight of undocumented students.

“Based on my appearance alone, I get asked that question a lot,” he said. He recognized that the presidential election created much anxiety among undocumented individuals. He took the time to meet with a good number of them. He heard their many concerns.

“There is a bit of a trust issue,” he said. “They don’t know my background, so I’ve had to take the time to meet with people and tell them who I am, what I’ve done and what’s most important to me. I think I’ve earned their trust over time.”

With those he met, Ogle shared his experiences of interacting with refugees from the other countries and realized one commonality between them and the undocumented−they suffer many of the same hardships.

“I felt a very deep connection after talking with them and seeing what they go through,” he said.

As part of his final semester at CSULB, Ogle addressed immigration issues by creating “Undocuversity,” a project aimed at raising awareness about the rights of undocumented students and challenges they face in the United States. Working with the campus’ The Dream Success Center and F.U.E.L. (Future Underrepresented Educated Leaders), he put together a public project−a wall−on the campus’ Speaker’s Platform.

In addition, as part of his semester-long efforts, he conducted research with the goal of educating individuals. And, in early April, as Executive Chair of the International Studies Student Association, he invited the German Consul General from the Los Angeles German Consulate and hosted an event titled “German & US Relations: A Talk With Hans Jörg Neumann”.

“My ultimate goal is to educate myself, learn about some of the hardships these students and their families are going through, and then hopefully educate other people,” he said.

Initially, the “Undocuversity” project was just going to be five pieces representing a solid wall between Mexico and the United States. Individuals would be able to share thoughts and draw on them. However, after meeting with other students and faculty he became sensitive to the psychological impact as well as other concerns the undocumented community on campus shared about the project. The installation changed. The once solid wall now had openings individuals could freely walk through. It had art. It was more welcoming.

“There was a symbolism showing that there are voices behind the wall too,” said Ogle. “There are voices in the community that are not really heard so the idea of the event was that students would come out of the shadows to share their stories.

“I took the constructive criticism I was given and worked with people. It actually turned out to be a really great project that developed over time because it ended up being more than a wall,” said Ogle, “It had art on it from (student) Narsiso Martinez and his art showed immigrant laborers drawn and stenciled onto agricultural cardboard, the kind that is actually used to move products on farms.”

With great help, the whole process to complete the project took Ogle a solid two months. By comparison, the display was up for just two hours. Still, it was well worth it to its creator.

“I just felt that it was really important for me to do something in my last semester that was very close to my heart and to see what I could do to help and maybe make a difference,” he said. “I can never really understand what it’s like to be undocumented, but I can educate others, educate myself and I can learn. The work put into this project required a lot of sacrifice, but this is a very rewarding time for me right now.”

As part of the 2017 commencement at CSULB, Jeffrey Ogle will be graduating in the 1 p.m. ceremony for the College of Liberal Arts on Wednesday, May 24.