Kylie Shahar embodies much of what the millennial generation represents—a desire to affect change and a passion for social justice and social movements.

Shahar, a double major in political science and philosophy and president of the Political Science Student Association, spent two separate timeframes at the Standing Rock Indian Reservation in North Dakota to protest the Dakota Access Pipeline, better known by its popular hashtag #NoDAPL. 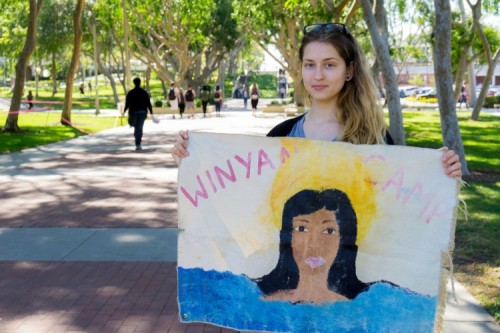 Kylie Shahar holds a flag she found at camp in North Dakota during her first visit in November. The flag reads “Women Camp” in Lakota. (Photo by Kevin Tran)

Kylie Shahar holds a flag she found at camp in North Dakota during her first visit in November. The flag reads “Women Camp” in Lakota. (Photo by Kevin Tran)

After taking several philosophy and political theory and science classes, Shahar was inspired by what she was learning on post-colonialism in the U.S. and by the lack of media coverage of the #NoDAPL protests.

“I wanted to go and see for myself, to talk to different people and essentially be a vessel of information for other people once I returned home,” said Shahar.

Shahar first left for North Dakota with a friend, Amanda Mendoza, a political science graduate student, in November. Their first stay of less than a week was a harsh wake-up call. Local law enforcement sprayed protestors with mace and blasted them with water cannons. Many of the water protectors, as the protestors are known, were native/indigenous people.

“It was so disheartening to see that police were getting away with this,” said Shahar. “They were trampling treaty rights and violating the Constitution.”

Although Shahar and Mendoza were not in danger of any bodily harm, they were able to make themselves useful by making sure others around them had basic necessities, such as water and dry clothes.

Just a month after they returned home, the pair drove back to North Dakota and stayed for five weeks. The second time around, both students were better prepared with gear, supplies, and had even started a GoFundMe and a fundraiser at a bar in Long Beach to gain community support of their efforts.

Part of Shahar’s duties during both of her stays were to maintain compostable toilets, chop wood, aid in the camp clean-up effort, and generally, as everyone did, look out for one another. After leaving North Dakota the second time, Shahar and Mendoza headed to Washington, D.C. for the presidential inauguration, where they and a group of other water protectors and allies were able to shut down one of the gates leading to the ceremony. The next day, both attended the Women’s March in the city.

“I hope people who are passionate about justice use their privilege to help others,” she said.

After graduation, Shahar will return next semester to finish her philosophy major requirements, while also applying to Ph.D. programs for philosophy. She eventually wants to bring philosophy to curriculums that focus on classes that are more traditional. Prisons and middle schools with at-risk youth will be her main targets for change.

“Philosophy really allows you to think about the world in a different way, so I want to add this element that lets people, specifically kids, to express analytical abilities,” said Shahar.

She also plans being involved in teaching and the theory side of politics.

“After this election, I was disillusioned,” said Shahar. “It was clear that polls and methods can fail us, so I want to focus on political theory.”

Professor of political science Mary Caputi sees a bright future ahead for Shahar.

“She is widely read and cares about politics in ways that many of her peers do not,” said Caputi. “Kylie has the intellect, the drive, and obviously the courage to go very far, and be president of the United States if she wanted to.”

Shahar has maintained her passion for social change, most recently at the final Teach-In on Collective Action at the Speaker’s Platform on campus April 19, where she and Mendoza spoke on their experience in North Dakota and how students can be agents of change.

“I really encourage students to be active and involved in things they care about, especially in their local communities,” said Shahar. “You can’t do it all, but small contributions always help.”