College of Liberal ArtsNewsTradition and Innovation: Comparative Literature in the 21st Century

Tradition and Innovation: Comparative Literature in the 21st Century 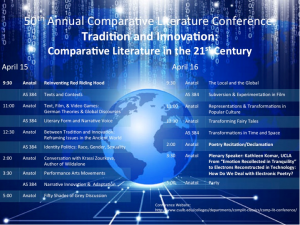 Tradition and Innovation: Comparative Literature in the 21st Century” is the theme of CSULB’s 50th annual Comparative World Literature and Classics conference to be held April 15-17 in the Karl Anatol Center. This year’s event marks the conference as the campus’ longest-running activity besides convocation and graduation.

The keynote address “From ‘Emotion Recollected in Tranquility’ to Electrons Reconstructed in Technology: or How Do We Deal with Electronic Poetry?” will be delivered by Kathleen Komar, professor of Comparative Literature and German at UCLA and past president of the American Comparative Literature Association.

The phrase, “emotion recollected in tranquility,” is from the preface written by British poet William Wordsworth for his 1800 collection of poetry “Lyrical Ballads,” explained Comparative World Literature and Classics Chair Carl Fisher.

“It is a concept of how we reflect on experience by creating intellectual space, separate from activity, and then finding ways to narrate and understand events and encounters,” he said. “In a pre-psychology age, it is the way an artist conveys the process of memory. Wordsworth’s ‘Lyrical Ballads’ talks about the quality of producing art, but more importantly, how art helps us understand our lives and our self-identity.” The keynote address will highlight the ways in which technology and electronic means of creating and delivering cultural content shift the grounds of understanding and interpretation.

The 50th anniversary conference will demonstrate the direction that comparative literature has taken both in its interdisciplinary aspects and its global reach. Panels will range in topics from the continuing relevance of fairy tales to evolving aspects of German literature to film adaptations of literary texts. There will also be a poetry slam event. Overall, there will be between 40 and 50 papers presented by CSULB faculty and students as well as scholars from out of the state and nation. Some of the conference presentations will be developed into articles for the department’s annual scholarly journal Genre.

Participating CSULB faculty members will include Comparative World Literature and Classics’ Kathryn Chew, who will host a panel aimed at students planning on graduate school, explaining how to deal with and capitalize on Classical Studies in the 21st century, along with Romance/German/Russian Languages and Literatures’ (RGRLL) Jeffrey High who will lead a panel on romanticism.

High, professor of German, has participated in the conferences as a speaker, panel organizer or in support roles since 2005.

“I have a relatively busy speaking and travel schedule and this conference is one of my favorite annual events because of the level of student involvement,” he said. “As a CSULB professor, it is as fun as it is rewarding to see large audiences of our students show their enthusiasm for extracurricular scholarly events and it is a pleasure to hear how impressed the visitors are with our students.”

High says that many RGRLL students have co-organized their first panels with faculty and delivered their first major papers at this event. Students also see faculty present their own research, which is different than what they experience in the classroom, and get their first professional opportunities.

The conference’s main topic is the rise of new practices in the creation and consumption of literature and other forms of cultural production.

“Our understanding of the world and our consumption of culture are mediated in different ways,” said Fisher. “It used to be that a poet could sit under a tree with a pen and paper. Now, everybody writes on computers. What we want to do is to show that comparative literature is a dynamic field. It is not a staid archive of the past. It is a continuing presence as we move into the future.” In fact, Fisher noted, comparative literature is usually on the cutting edge of emergent fields, such as medical humanities and digital humanities, which will be represented in the conference.

One reason Fisher believes the conference has lasted half a century is its topicality. Recent conference themes featured 2014’s “Connections and Intersections: Interdisciplinarity Within and Among Disciplines,” 2013’s “Popular Culture(s)” and “Drawing the Line(s): Censorship and Cultural Practices” in 2012, which was tied to the Carpenter Center’s B-word project.

“The conference deals with issues that are current, with things people have seen in the news,” he said. “Students always find it fascinating. In an average conference year, we have drawn a head count of around 500, over a two-to-three-day span, to hear between 30 and 40 panels. In 2008, the university hosted the national comparative literature conference which drew an attendance of 1,200, largely based on the national reputation of the on-campus conference.

According to Fisher, one of the conference’s strongest appeals, besides the weather, is its intellectual engagement.

“This conference represents the opportunity to work with people outside narrowly defined disciplines, to engage with things that matter to people,” he said. “Almost everything in our daily lives deals with the humanities. In the current cultural climate, too often the humanities are not seen as an appropriate pathway of study because they are not considered as directly related to an occupational path. In fact, what we do is critically analyze, develop student’s writing abilities, and ensure they can develop intercultural competence and global understanding. We provide transferable skills for many occupational contexts.”

The departmental strengths that have sustained this conference for 50 years feature its breadth of intellectual interests.

The conference strikes a balance between research and practice.

“This conference allows CSULB to integrate the research intensivity of CSULB’s faculty with the kinds of activities we want our students to participate in,” said Fisher. “The conference also reflects the fact that our teaching is dynamic and vibrant. Students get to engage in activities that add value to their degrees both inside and outside the classroom. They find all sorts of new interests they never knew they had before.”