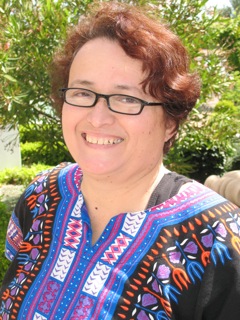 Antonia Garcia-Orozco  (Dr. Toni) is an Associate Professor in the Chicano and Latino Studies Department at California State University, Long Beach.  She is also a respected singer/songwriter who specializes in Nueva Trova and other musical genres. As a performance artist she directed a student production of “The Revolution redux” with her CHLS 380 theatre students during the spring of 2014. She also performed in Monica Palacios’ Queer Chicana Soul at Highways Performance Space. Dr. Toni composed and sang the lead solo in the choral piece “Tengo Fe” written for the Metropolitan Community Church ICM choir and performed the world premiere at the Noche de Memorias World Aids Day.

Dr. Toni received her AA in music from LACC, her BA and MA in Comunication Studies from CSUN, and her PhD in Cultural Studies from the Claremont Graduate University in 2005.  Her dissertation, Cucurrucucu Palomas: The Estilo Bravío of Lucha Reyes and the Creation of Feminist Consciousness via the Canción Ranchera examined the role of gender in Mexican song.  Dr. T is currently working with acclaimed photographer Laura Aguilar on The Frida Project, which will be converted, into a music video that accompanies the song “Y Unos Cuantos Piquetitos.” A CD with a collection of her Nueva Trova songs is scheduled for release in 2015. She can often be found singing, writing songs or playing her guitar in her office.