Our program was developed in response to the high incidence of sexual assault on college campuses, which Simon noted, “is now at near epidemic proportions.” In a frequently cited study, Koss, Gidycz, and Wisniewski found that 27% of college women had experienced rape or attempted rape, 25% of college men were involved in some form of sexual aggression, and 8% of men had raped or attempted to rape a woman. Since 2000, interACT has provided sexual assault intervention programs for universities, juvenile detention facilities, housing projects, after-school programs, and drug/alcohol rehabilitation centers. The interACT troupe presents complicated, realistic scenes about domestic violence and sexual assault, and invites audience members to enact possible interventions on stage with actor-educators who reflect the diversity of our urban campus. The performance, which was developed in collaboration with experts in sexual trauma and based on current research, helps audience recognize the warning signs of abusive relations, better understand how individuals feel after being raped, and learn how to effectively intervene in order to prevent assaults. Having gained local recognition for their work, interACT has been invited to perform at numerous venues throughout the United States.

Although research has consistently shown that didactic (lecture-based) approaches to rape prevention are ineffective, most programs still employ models that keep listeners in a passive mode. Conversely, interACT fosters a “proactive” audience stance ( the highest level of audience involvement). During interACT performances, audience members literally join the actor-educators on stage and attempt to prevent sexual assault and comfort survivors of domestic abuse. Hence, this program allows audience members to have a safe space to rehearse assertive communication strategies.

We are one of the few rape prevention programs that has been vigorously evaluated, and the quantitative and qualitative results of the research have been presented at national conferences and published in peer-reviewed anthologies and leading academic journals. interACT has been recognized for raising awareness about sexual assault, being highly involving, promoting emphatic and comforting responses from audience members, and providing a model where audience members can rehearse proactive behaviors that can potentially disrupt a sexual assault episode. The research on the interACT program is ongoing. 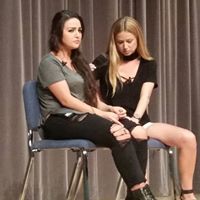 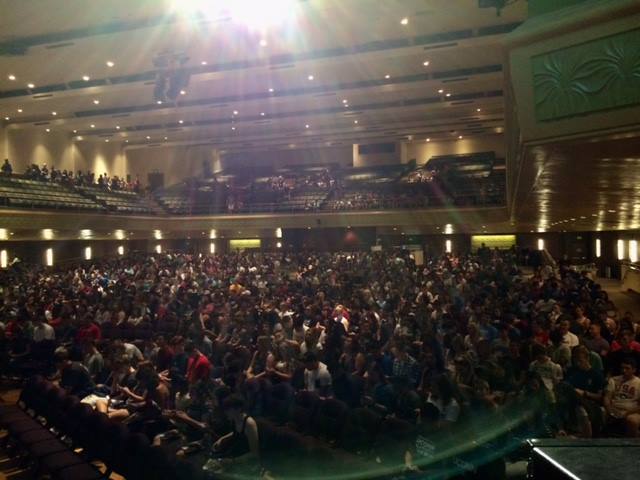 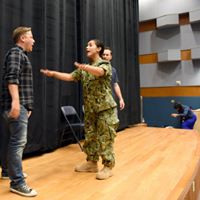 “The quality of the performance is unfailingly excellent and the message is powerful. As a rape prevention educator and researcher I can attest to the effectiveness of this method of getting the message across on a topic as difficult as rape.” – Patricia Rozee, Professor of Psychology & Nationally Recognized Rape Prevention Expert 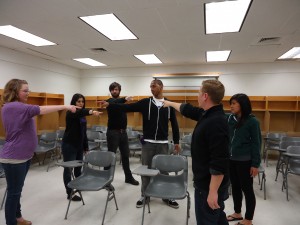 In 2008, ballot measures throughout the United States were used to define marriage as a legal union between a man and a woman. In a hotly contested election in California, proposition 8 passed by the slimmest of margins, denying members of the LGBT community the legal right to be married. In the ensuing years, gay marriage has been debated in private spaces as well as the national scene. In addition, there have been a number of dramatic reports about lgbtiq individuals being bullied, beaten and even killed. In response to these issues, interACT created “Say What You Really Want to Say’, an authentic and powerful presentation about students coming to terms with homosexuality and homophobia. The scripted portion of the show is verbatim from student journal entries, and the proactive scenes encourage audience members to intervene when hate speech is used, stereotypes are perpetuated, and bullying occurs. 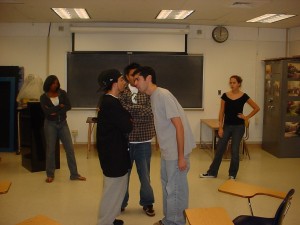 “We need to continually break the silence about racism whenever we can”, Tatum (1997) argues, “But how do we start?” (p. 193). From 2000-2006 the interACT troupe performed and toured the show “The Words of Our Students.” The scripted portion of the show was based entirely on student journals, and the proactive scenes were utilized to enable audience members to deeply consider issues raised during the performance. We performed the show at many venues throughout the United States where communities were struggling to articulate their feelings about race and racism.

“Words” was retired in 2006 because the show was based on issues that were directly connected to world events that were unfolding in 2000/2001. Today, we are able to customize proactive shows based on racism and/or diversity for your university or organization. Our presentations can help illustrate both the need for and the effect of promoting dialogue between audience members that breaches contemporary conventions for conversations about race. For example, we are currently working with the University of San Diego to create personalized performances on diversity for their community.

“What interACT is doing is so vitally important in a multicultural society, in particular one such as ours that is becoming ever more diverse.” – Heidi Belrich, Ph.D., Deputy Director, Southern Poverty Law Center