Culture Jamming and the Art of Subversion: A Multidisciplinary Perspective 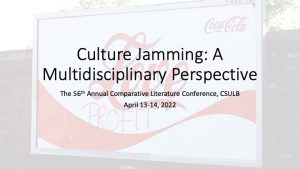 Venue: California State University, Long Beach. Mainly in person with a handful of sessions on zoom.

Coined  in the eighties, the term “culture jam”  refers to the appropriation by social activists of the linguistic trends characteristic of consumerist capitalist societies. In an effort to disrupt mainstream cultural institutions, culture jamming organizations and the individuals behind them subvert and expose the tactics used by media culture and its affiliates. In so doing, the jammers borrow the very language of corporations, political discourse, and mass advertisements. Identity correction, media pranks, modification of billboard advertisements, memes, pastiches of company logos, street protests, hoax news, fake commercials, are some of the activities geared towards disrupting the status quo and questioning egregious political and social realities. The Yes Men, Burning Man, Cacophony Society, Guerilla Girls, Graffiti Research Lab, Billionaires for Wealthcare, Billboard Liberation Front, Church of the SubGenius, Regurgitator, The Bubble Project—. Those are some examples of culture Jamming organizations that have emerged over the last three decades.

A 2017 collection of papers titled Activism and the Art of Cultural Resistance (New York University Press) demonstrates that the concept of culture  jamming, far from being dépassé, has continued to be deployed in a variety of ways, notably in 2020/2021, in light of the Covid-19 pandemic and global movements. Have cultural jammers succeeded in undermining the social firms targeted?

This conference invites paper and panel proposals on all aspects of culture jamming. Possible topics can include but are not limited to:

-Borat the character and Ali G
-Intellectual impostures and the Bricmont-Sokal hoax
-The Yes Men and their hoaxes
-Memes, counter memes, and meta memes
-Underground presses
-Meme hackers of the 70s and 80s
-Reality as simulacrum
-Pranksters and tricksters in art and literature
-Epic pranks in Greek/World mythology
-Cyberspace and the end of privacy
-Banksy’s street art and the politics of space
-Corporate satire in popular culture
-The Guerilla Girls
-Occupy Tahrir
-The Poetics of Subversion
-The Yes Lab and Me
-Covid19 vaccination as metaphor
-Marcel Duchamp’s LHOOQ
-Harry Potter and real magic
-Civil disobedience as art form
-The art of appropriation
-Activism and speaking truth to power

We are thrilled to announce that the plenary talk will be delivered by Jacques Servin, co-founder of the Yes Men, on Wednesday, April 13th, at 2PM (PDT). The title of his talk is: “Never Lie, Little One: The Use of Humor in Telling the Truth.”

Proposals for 15-20 minute presentations should clearly explain the relationship of the paper to the conference theme, describe the evidence to be examined, and offer tentative conclusions. Abstracts of no more than 300 words (not including optional bibliography) should be submitted by March 1, 2022. Please submit abstracts as a Word document in an email attachment to comparativeworldliterature@gmail.com

Please do not embed proposals in the text of the email. Make sure to indicate your mode of preference (Zoom or in person) for planning purposes.

The conference committee will review all proposals, on a rolling basis.