Remotely sensed vegetation mapping can allow for improved management of remote areas with new, rare, or endangered plant populations. This study used eCognition software and WorldView 2 aerial images to create a classification of coastal vegetation in southeastern Kauai based off of ground points taken throughout the study area. The classification scheme was composed of fifteen classes of species, communities and landcover types. This method of vegetation mapping was efficient because the study area was well known, and while it could be applied to a larger area there must be sufficient ground points for the classification to be successful.

The ability to map vegetation through remote sensing can open a range of opportunities for the management of ecosystems and the preservation of at-risk species through the aerial identification of plant communities and individual species. Improved imaging capabilities allow for more accurate images with finer resolutions, and can better lend themselves towards vegetation mapping. These capabilities are particularly useful in remote locations with rare plants, and the island of Kauai in the Hawaiian archipelago is a perfect example of one of these areas. Being able to identify individual plants from aerial images can allow for the identification of new, rare, or endangered plants on the island and can help locate possible communities where these plants may grow. The aim of this study was to determine if an efficient classification scheme could be derived from a series of ground points and aerial images to sort coastal vegetation into a set of classes using eCognition software. This design could be applied to a majority of the coastline on Kauai, and a similar technique could be used to identify plant communities farther inland.

Forty-three ground points were recorded using a Trimble GPS unit throughout the study area at locations where distinct patches of vegetation were growing. Both native and alien plants were recorded. These plants were identified in the field and their GPS locations mapped on a pan-sharpened 8-band WorldView 2 aerial image of the greater Makauwahi cave area in southeastern Kauai. The study area consists of a buffer of 250 meters inland from the coastline. A classification scheme was defined using eCognition software and applied to the study area based on the areas of known vegetation. The class series was based on the plants identified in the ground points and their ability to be seen in aerial images. Thirty points were used in assigning classes to the area and the remaining points were used for truthing  the resulting classification.

(Classification became squished in the upload, it looks pretty in real life, I promise.)

The above figure displays the final classification of the study area broken into fifteen classes consisting of plant species (7), vegetation communities (2), and land cover types (6). The classification is draped over a panchromatic WorldView 2 image for reference and texture. The ‘mixed native’ class primarily includes Jacquemontia, Sporobolus virginicus, and Vitex rotundifolia. This classification is useful for looking at the distribution and relative amounts of different types of vegetation. When determining percent cover of the study area by class it becomes apparent how dominated the coastal area is by alien vegetation communities (Figure 1). The small percent of the study area that was assigned to a native class is limited to areas just along the shoreline and almost none are found very far inland. 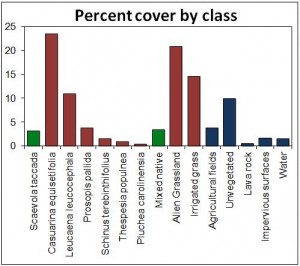 This classification method worked well to classify vegetation in the study area. The vegetation in the study area was well known, the study area was relatively small, and a majority of the vegetation fell into three classes (Figure 1). Broad classes such as ‘alien grassland’ could contain many different species and generalizing them into one category may decrease the accuracy of the classification and limit its use and application. The use of eCognition for this classification can be useful as long as a sufficient number of known ground points are available for classing out areas and for truthing the final classification. Future research in this area could expand to more coastal areas around the island as most of these locations are relatively easy to access to collect ground data.