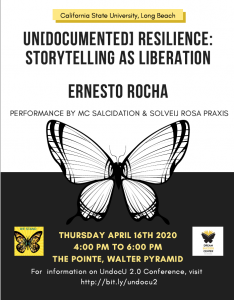 Ernesto Rocha (undocubae) is an organizer, storyteller, transformational coach, TEDx speaker and presenter. He has over 13 years of community and political organizing experience. His focus has been on advocating for immigrant rights and low-wage workers in various industries. His performances and stories have reached the stage at notable platforms including TEDx, Jubilee Media and KPCC’s Unheard LA. In 2019 he appeared on a segment of MIDDLE GROUND to discuss border security and undocumented immigration which has received over 1.2 Million views. In 2018 he performed his original story, “Plantitas” at KPCC’s Unheard LA live show at the Carpenter Performing Arts Center in Long Beach. He delivered his first TEDx Talk at CSULB in 2017 entitled, I AM NOT My Status: Perspectives of an Undocumented Immigrant. In it, he explores the theme of identity formation and the process of personal liberation through storytelling. His most recent venture was to launch Loose Accents, an original podcast that celebrates the brilliance and struggle of growing up undocumented in the United States. Loose Accents seeks to uplift the complicated intersections of identity, race, sexuality and class in the day to day adventures of its hosts living in the current political climate. undocubae is also the co-founder of Cocoon Storytelling, a storytelling series created in Long Beach to showcase the narratives of people of color. Ernesto Rocha Flyer

This event is a part of the UndocU 2.0 conference.