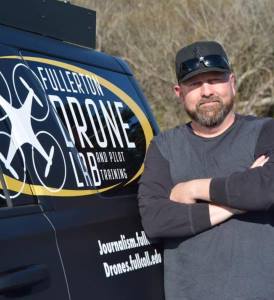 Jay Seidel has been working in or teaching journalism for over 20 years. His passion and interest are in multimedia storytelling and utilizing emerging technologies (like drones and virtual reality) to tell stories.

Prior to becoming a college instructor in 2005, he worked for 12 years as a writer and editor for various publications, including the Los Angeles Times and Popular Hot Rodding. He was also the publisher of the hyperlocal community newspaper in La Habra, California for six years. Seidel served 12 years in the U.S. Army and California Army National Guard where he worked and helped lead troops as a combat engineer and photojournalist.

Seidel is a proud graduate of CSULB, where he earned his bachelor’s degree in journalism and was the editor in chief of the Daily 49er. He earned his master’s degree in communications from CSU Fullerton.

With a lifelong love of aviation, he is a licensed drone pilot and has been flying drones since 2016. He is an AUVSI TOP UAV Instructor and is the FAA’s Safety Team’s Drone Pro for Orange and Los Angeles counties. He regularly speaks across Southern California communities about drone safety and drone education.