I appreciate and respect you

“I Appreciate You and Respect You” Linguistic Landscaping Project

This project is a partnership between Dr. Alexandra Jaffe (Chair of the Linguistics Department) and Dr. Craig Stone (Director of the American Indian Studies Program) and is intended to increase knowledge of and respect for the linguistic and cultural diversity of faculty, students and staff.

The project was born out of Stone’s participation in the CSU Ethnic Studies Task Force, which reinforced the urgency for campuses to take concrete action to make all members of a community feel appreciated and respected. This was coupled with Jaffe’s interest in “Linguistic Landscaping”—how written language in public places reflects and shapes the cultural climate and Stone’s expertise in public art.

The project is thus focused on promoting mutual knowledge and empathy across different groups and is the first collaborative effort of the Puvungna Arts Empathy Production Project.

As the videos and recordings below illustrate, speakers of different languages and dialects are recorded saying a sentence that expresses appreciation and respect.

The phrase (a translation or adaptation of “I appreciate and respect you”) is printed on a laminated poster that has a QR barcode (see an example below). Viewers who capture the code on a smartphone camera are led to this page (or a similar page on the AIS website) where they can listen to sound files and view videos of the speaker or signer on the poster. These posters are put up around the campus–either as roving exhibits or individually (on office doors or walls, for example), thus serving as a visible notice of sometimes invisible linguistic diversity attached to a positive message of intergroup relations. 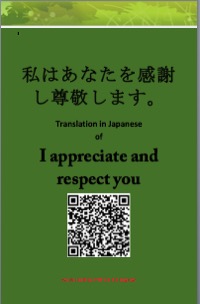 The goal of the project is ambitious: To record all the languages (and dialects!) spoken or signed on the CSULB campus and to have the video and audio files present on many departments’, offices’, organizations’ and clubs’ websites.

These posters were first introduced at the February 2017 International Mother Language Day, that celebrated the diversity of our campus’s languages. Below, please find video and audio files of individuals interviewed for this project by the Linguistics Department.