This year, the theme was
“Towards Sustainable Futures through Multilingual Education”

The Department of Linguistics and the Linguistics Student Association organized events designed to raise campus awareness of the linguistic diversity of our campus community and the value of multilingualism and the multiculturalism that accompanies it.

Displayed the Message from the UNESCO Director General 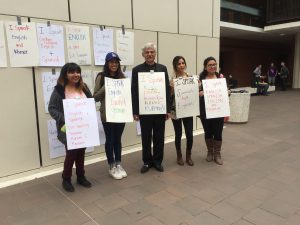 about the day in 5 languages (French, Russian, English, Spanish, Chinese and Arabic) as well as the UNESCO Statement on the Value of Multilingualism.

Described the field of Linguistics.

Explored definitions of Mother Language and how it relates to Heritage, Immigrant, Indigenous, Minority, Signed, Creole languages as well as mixed codes

Highlighted student work, including language documentation of Arabic Dialects (Farasani and Faifi), Linguistic Landscapes in Corsica and perceptions of Race and Language in Brazil.

Featured a map of Indigenous Languages of California with links to the UC Berkeley website documenting
http://linguistics.berkeley.edu/~survey/languages/california-languages.php

Provided information about opportunities for learning about language and

culture in the following departments and programs:

MULTILINGUAL SIGNS AND THE LANGUAGE PARADE

Visitors to the event were invited to make posters on which they listed the languages they use, including both their “native” languages and other languages and varieties they had acquired in their lives.

These posters were displayed on a wall and then held by participants in a “Language Parade” around the lower campus quad.

Visitors were challenged to follow a QR code taking them to the New York Times Dialect Quiz  to see how they were placed on a dialect map based on answers to 25 questions about vocabulary and pronunciation. 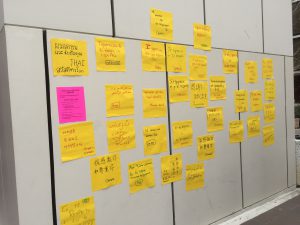 As part of the I Appreciate and Respect You Project, 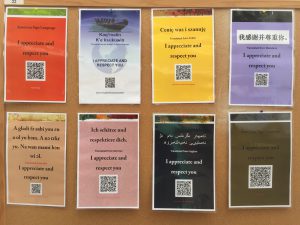 visitors wrote out this phrase in their languages on giant post-it notes, which were displayed on a wall.

Nearby, visitors who agreed to be audio recorded entered a portable sound booth to record themselves speaking the phrase “I Appreciate and Respect You” and telling about themselves and their languages.

Students from the Linguistics Field Methods Graduate seminar demonstrated the process of linguistic elicitation of the Uyghur language, spoken by one of their classmates to a crowd of curious onlookers.