Brian is Professor of Philosophy and the Charles S. Casassa Chair at Loyola Marymount University. He earned his MA in philosophy at CSULB in 1997, where he wrote a thesis on the phenomenology of obligation under Prof. Guerrière. After leaving CSULB, he completed a PhD at Boston College. His writing takes up a wide variety of issues, but environmental philosophy, ethics, and philosophy of religion have been consistent foci. His books include Interpreting Nature, Emplotting Virtue, Carnal Hermeneutics, and, most recently, Melancholic Joy: On Life Worth Living. He lives in Los Angeles with his wife Gitty (a professor of political science at the University of La Verne) and daughters.

Congratulations to Sandra Avitia, who graduated with a triple major in Philosophy, French, and International Studies this past FA20. (Yes, you read that right—a triple major!)

Sandra’s interest in Philosophy began in high school when she joined a program that incorporated Philosophically-based English classes into the curriculum. She started off reading classics by Plato, studying his ideas on metaphysics and ethics. She also studied philosophical theology with Dante’s Inferno. This program later included readings on more controversial topics such as female circumcision and its role in medical ethics. Sandra planned to become an international lawyer with a concentration in human rights, as she realized philosophy was the perfect major to prepare her for this career. Not only did philosophy challenge her to form well-written arguments for topics such as existentialism, altruism, and ethics, but it also challenged her to analyze cultural norms around the globe and different ways of thinking.

As she embarked on her academic journey at Cal State Long Beach, she studied philosophies such as Taoism and Confucianism, exploring the Eastern views on time and consciousness. She continued her studies in medical ethics with Professor Dieveney, learning about different perspectives on topics such as embryonic stem cell research and euthanasia. She took a Foucault class with Professor Rosenkrantz, and enjoyed the distinct perspectives Foucault takes on sexuality and his ideas of power and its relation to knowledge.

Sandra originally started off as a Philosophy major but later realized the subject complemented her other academic interests. She thus went on to add majors in International Studies and French. Philosophy came up in her International Studies classes as well. This included Karl Marx’s theory of alienation of labor as well as renowned French philosophers Simone de Beauvoir’s work The Second Sex and Frantz Fanon’s Wretched of The Earth. In addition to her philosophy coursework, Sandra took classes on international migration and its relation to Benedict Anderson’s Theory of Imagined Borders. Her coursework followed a class on international development that focused on understanding the benefits and limitations of UN agencies in poorer countries. 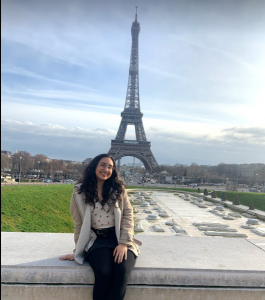 Sandra left North America for the first time in the FA19 to start a year abroad at the Universities of Paris in France, where she took the majority of her French classes and immersed herself in the rich culture of the country. These classes included some focused on French culture and history, a class on the most popular comic books in France, two others analyzing the differences between American and French culture and classic French film and novels. Sandra also had the opportunity to study the plethora of highly esteemed French philosophers. She studied the revolutionary works of Voltaire and Montesquieu, and her coursework also included those of Rousseau and Diderot. In addition to the famous philosophers of the Enlightenment, she had the opportunity to study sociolinguistic philosophy in a course on the role of French in post-colonial French territories. 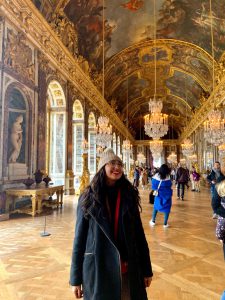 Unfortunately, back in March, the looming COVID-19 pandemic brought Sandra’s study abroad experience to an abrupt halt. Countries started to close their borders and she was left with a very difficult decision to either stay in France or return home. Ultimately, Sandra decided to remain in France until July 2020, where she experienced one of the strictest lockdowns in Europe. However, it was an opportunity to compare the different cultural responses to the pandemic.

Sandra is extremely grateful for her study abroad experience as well as for her newfound community at Cal State Long Beach. She started off her first semester at Cal State Long Beach in a new city full of ambition, and is happy to have found a multitude of teachers and faculty to help guide her academic decisions toward triple majoring and studying abroad. It was her community at Long Beach that has helped shape the determined critical thinker she is today. She has excelled in her academic fields, and ended her semester with a 3.62 GPA.

Sandra plans to attend grad school in the upcoming years. She wants to earn a Master’s in public policy and pursue a career in human rights activism. Sandra currently speaks three languages: French and Spanish, in addition to her native English. She hopes to one day work with a United Nations specialized agency to continue her passion for human rights.

Congratulations to graduate student Dean Bruce, who won the award for Best Master’s Thesis in AY19–20 in the College of Liberal Arts. Dean produced an exemplary piece of historical scholarship, and one of the most erudite theses to come out of the MA program in decades.

In SP11, Dean earned a Bachelor’s degree from Cal State Long Beach in Cell and Molecular Biology. A couple of years later, he enrolled in philosophy of science with Prof. Cory Wright, and—after taking a few other courses over the years to catch up—Dean matriculated into the graduate program in Philosophy. Initially, Dean was focused on constructivist epistemology and scientific anti-realism; he also has an abiding interest in the David Hume’s moral and scientific philosophies, and was influenced by Prof. Jason Raibley’s moral psychology class. However, after seminars in philosophy of religion with Prof. Marcy Lascano, supplemented with courses in Plato and Aristotle with Dr. Max Rosenkrantz and continental rationalism with Dr. Larry Nolan, Dean became intrigued by medieval philosophy and read extensively throughout the primary, secondary, and tertiary literature on this period.

While he certainly has an affinity for early modern philosophy, and Hume in particular, Dean judged that this field had been extensively covered. And so he chose a thesis on Islamic philosophy owing to his desire to work on a novel and historically exotic philosophy topic. The result was a close study of the medieval Islamic thinker Abû Hâmid Muhammad ibn Muhammad al-Ġhazâlî (fl. 1056–1111 CE) on the topic of occasionalism. al-Ġhazâlî was a highly influential philosopher, theologian, jurist, and mystic, and influenced numerous Muslim and Christian philosophers, like Avicenna and Thomas Aquinas. Traditionally, he is taken to have endorsed occasionalism, which is the metaphysical doctrine that God is the only genuine cause, and that any secondary causes merely provide the ‘occasion’ upon which God exercises causal power in the world. Contrary to the standard interpretation, however, Dean argues in his thesis that al-Ghazâlî’s commitment to occasionalism is complicated and often indeterminate, and raises questions about natural science and divine omnipotence. Here is the abstract to Dean’s thesis:

This thesis is a study of al-Ġhazâlî’s views on occasionalism. Although al-Ġhazâlî’s views on occasionalism are indeterminate, it is evident that his theological work aimed to affirm the omnipotence and liberty of God in exerting influence upon created order. One polemical challenge against divine omnipotence and the integrity of religious revelation from the Islamic tradition comes from the Aristotelian-inspired philosophers who argue that the order operates through natures that are intrinsic to certain objects. This view on natural philosophy undermines the orthodox commitment to miracles as depicted in the Qur’an and hadith literature. al-Ġhazâlî used a variety of arguments to affirm miracles and God’s agency in the created order, not only assailing the natural philosophy that the world operates according to the natures intrinsic to created objects, but also arguing that God can operate through mysterious and previously unknown phenomena in the natural order. Thus, according to al-Ġhazâlî, since God can manifest his power through mysterious, unknown phenomenon, there is no epistemological means to distinguish between natural and supernatural events. That is unproblematic for al-Ġhazâlî if God’s power is so pervasive that it encompasses everything. However, it undermines miracles as being a theological proof of the validity of revelation and prophecy.

Dean successfully defended his thesis on March 4th to great fanfare, just before the University began closing down due to the covid-19 pandemic of 2020, and is graduating in SP20 from Cal State Long Beach, again—this time with a Master’s degree in Philosophy. His accomplishment represents the best of the Liberal Arts: original research that seamlessly integrates scientific understanding of the cosmos with historical exegesis and the analysis of important ideas during the Islamic Golden Age. Again, congratulations, Dean, on your accomplishment. You’ve made us all very proud!

In the near future, Dean plans to attend a doctoral program to work on early modern moral sentimentalist metaethics, particularly as it concerns the work of Francis Hutcheson, David Hume, and Adam Smith. He also plans to return to campus to engage in discussions with his professors and fellow philosophy students He may continue to work in this area, and pursue publication of his research and to work further in the philosophy of religion.