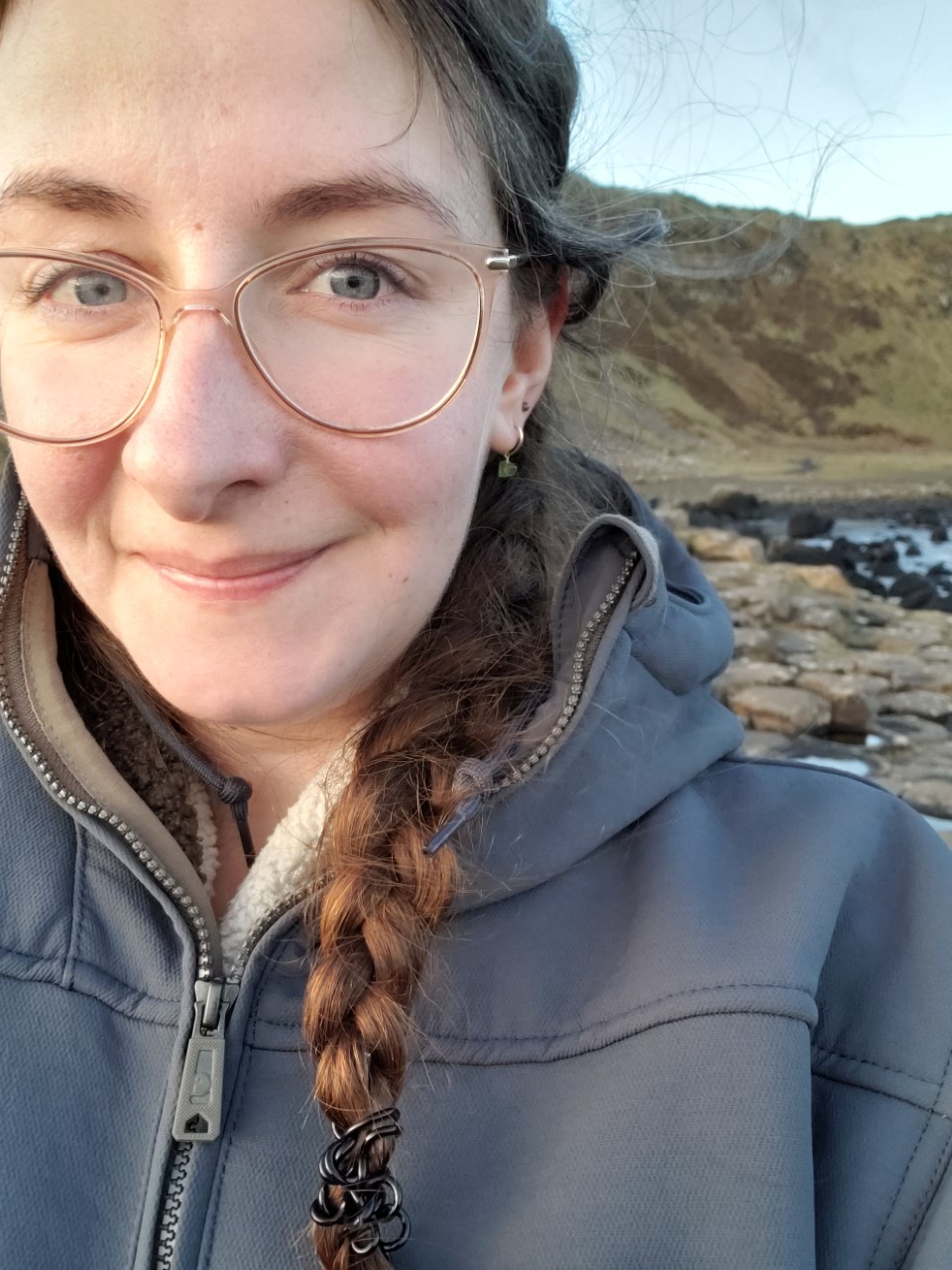 who is the second Philosophy graduate student in the last three years to win the award for Best Master’s Thesis in the College of Liberal Arts. Caitlin was lauded for the depth of her research in philosophy of neurobiology, which appeals to exciting new work in optogenetics as a test case to examine a long-standing debate between mechanists and reductionists.

Caitlin completed a Bachelor’s degree in Psychology at (what is now) Cal Poly Humboldt, where she made the President’s list several times. In what was supposed to be her final semester, Caitlin elected to take a 300-level class on Kant and Hegel. That experience led her to stay on to complete an entire minor in Philosophy in a single semester—a decision that would change the course of her life. In FA19, she began in Dr. Nell Wieland’s graduate proseminar on animal cognition, and went on to take courses on early modern philosophy with Dr. Jayasekera, the epistemology of know-how with Dr. Charles Wallis and color perception with Dr. Wayne Wright, among others.

In SU20, Caitlin successfully applied for a research assistantship with Dr. Cory Wright. After getting up to speed on the seminal literature on reduction and reductionism in philosophy of science, she pivoted to surveying the last 100 years of research on memory and then to the latest research in optogenetics. Caitlin’s assistance has proved integral to work on a joint research paper on reductionist appeals to optogenetics; preliminary work on this topic led to two poster presentations at the Society for Philosophy and Psychology and the European Society for Philosophy of Science, along with a review of Alex Rosenberg’s 2020 book, Reduction and Mechanism, in Australasian Journal of Philosophy.

Caitlin’s experience as a summer research assistant eventually led to her thesis research, too, where she argued that the continuity between reductionists and mechanists is overstated, and that optogenetics is not the parade case that reductionists have billed it as. Explanations of mnemonic processes—like those given for engrams and ecphory—must appeal to intermediate levels of mechanistic componentry and so cannot just be ‘nothing but’ lowest-level molecular operations within, e.g., place neurons in the dentate gyrus. Ever the equal opportunity critic though, Caitlin also argued that mechanists, for their part, offer what is effectively only a promissory note; for without construct stabilization and domain integration, there is no adequate mechanistic explanation from optogenetic research on engrams. Consequently, mechanists also have their work cut out for them as well. Here is the abstract to Caitlin’s thesis:

Philosophers of neuroscience reflect on questions foundational to neuroscience and neuroscientific practice. Ruthless reductionists characterize neuroscientific research as providing evidence for direct causal relations between molecular processes and cognitive phenomena, whereas new mechanists characterize neuroscientific research as providing schemata for multilevel explanations of cognitive phenomena. In this thesis, I examine the debate between these competing characterizations. To do so, I analyze a case study of the search for engrams in optogenetics research. Optogenetics is a tool that neuroscientists use to elicit learned behavior by labeling and re-activating neurons that were active during learning. The role of the engram construct—conceived as the neurophysiological entity resulting from learning-induced changes and responsible for the retrieval of a memory—is to guide optogeneticists to the neurophysiological structures that function as engrams. I argue that this research program is not ruthlessly reductive, nor does a mechanistic explanation obtain.

Impressively, Caitlin managed to flourish—not in just one subject matter—but in four: Philosophy of Science, Psychology, Cognitive Neuroscience, and Molecular Biology. Caitlin successfully defended her thesis on June 15th to great fanfare, and graduated in SU21 from Cal State—this time with a Master’s degree in Philosophy. Her accomplishment represents the best of the Liberal Arts: original research that seamlessly integrates au currant scientific research and philosophical argumentation in order to demonstrate how methodological considerations both do, and do not, bear on the justification of philosophical theories.

Caitlin was subsequently admitted to several top PhD programs—an impressive feat in Philosophy, given how many of them have approximately 95% declination rates. Caitlin ultimately decided to attend the History and Philosophy of Science program at the University of Pittsburgh. (In HPS circles, Pitt vies with Cambridge University for having the #1 doctoral program in HPS in the Milky Way Galaxy.) Caitlin hopes to continue building on her successes here at Cal State Long Beach as she continues to develop her scholarship at Pitt. Again, congratulations, Caitlin, on your accomplishment. You’ve made us all very proud!