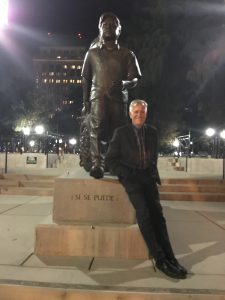 I am Professor of Political Science at California State University, Long Beach, specializing in theories of international politics and political violence.   I received my B.A. in History and Biological Sciences from the University of California, Irvine, and my M.A. and Ph.D. from the Princeton University Program in Political Philosophy.  I am currently writing on what I call pharmacotic violence: the relation between political violence and human sacrifice, and the ways that political societies have viewed war as medicine, poison, and addictive drug.

“’The Fair Fame of the Dead’: The Precession of War Simulacra and the Reconstruction of Post-Cold War Conservatism”, Ch. 3 of Frederick M. Dolan and Thomas L. Dumm, Eds., Rhetorical Republic: Governing Representations in American Politics (Amherst: University of Massachusetts Press, 1993)