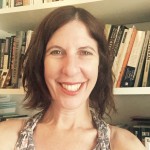 “Good Kill? US Soldiers and the Killing of Civilians in American Film,” in Disappearing War (Edinburgh University Press, 2017)

“The Afghanistan Experience: Some Reflections on Democratization by Force,” Parameters, Autumn 2012, volume 42, No. 3.

“The Ulenspiegel and Anti-American Discourse in the American Sector of Berlin,” German Politics and Society, Vol. 23, No. 2, Summer 2005.