Learn German at CSULB! Did you know you can learn German at Cal State Long Beach? You sure can! The RGRLL Department offers a wide range of German courses: from 101A for absolute beginners all the way through graduate seminars. We can help you meet your goals regardless of why you want to learn German. Study German @ The Beach. Wir wollen helfen.

WHY STUDY GERMAN @ THE BEACH

PERSONALIZED ATTENTION. You’ll get to know every faculty member and student in the department. We’re big enough for a wide range of interests, but small enough to form a real community. We want to help you.

EASILY DOUBLE-MAJOR OR MINOR. German pairs perfectly as a double major or minor to dozens of other academic programs at CSULB: Film and Electronic Arts, Linguistics, International Studies, Art History, Political Science, History, Philosophy, Music, Business, Journalism, Economics, other languages, and on and on.

GERMAN IS USEFUL. For a lot of fields, jobs, places, and hobbies. You can use it to read historical documents. It could help you get a job at German companies such as BMW, Mercedes, Porsche, Volkswagen, Lufthansa, Siemens, Hamburg Süd, Bayer, etc. In addition to being useful for travel in Germany and Austria, it tends to be useful in unexpected places as well; you could find yourself speaking German in Croatia, Poland, or, well, Los Angeles. You can use it to finally understand Rammstein lyrics in the original language; those songs might not be about what you think they’re about. German will let you get more out of Bach too. You might not believe us until you spend some time with the texts in the original language, but German literature can be mind-blowing. Many German movies are better than you think too. Oh, and you might be interested in reading thinkers such as Marx, Nietzsche, and Freud in their own languages as well. There’s so much that you could do with German that it would be impossible to list it all here.

STUDY ABROAD. We offer a variety of opportunities for  study abroad in Germany and Austria as well as other immersive experiences. Plus, we have lots of scholarship funds designated for students in our program to study abroad. We want you to have immersive experiences in German, and we want to help make that happen for you. (For more information, see the separate Study Abroad section of our website.)

GERMAN IS EASY AND FUN. Don’t believe us? See if you can guess the meaning of the following German nouns: 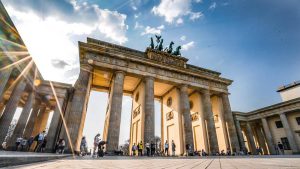 Requirements for the MA in German:

What are our former MA students doing now? :

How to apply to the MA Program in German

A degree in German emphasizes competency in the use of language and a thorough understanding of important aspects of contemporary society in German speaking countries (literature, political life, film, social issues). At the heart of the European unification process and serving as the new bridge towards Central and Eastern Europe, Germany, Austria, and Switzerland play a pivotal international role in politics, in trade and in cultural exchanges. 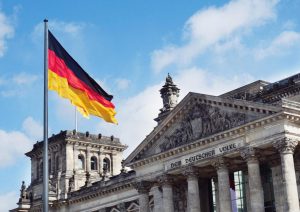 A wide range of options are available for CSULB students to study in Germany and Austria as well as in immersive German-language programs in the United States. We want you to have such experiences.

Below are some standout German-language options. This list of programs is nowhere near exhaustive. It represents merely a few highlighted options:

For more information, consult with the German Program Director, explore the CSULB Study Abroad website, check out this brochure, and/or talk with someone in the Study Abroad Office (Foundation Building, Room 185).

German in the United States:

All of these resources are free.