Professor Jake Alimahomed-Wilson recently published a co-edited book (with Ellen Reese), called: The Cost of Free Shipping: Amazon in the Global Economy. The book contains chapters written by Amazon warehouse workers, social justice activists, labor organizers, researchers, and scholars analyzing the rise and impact of “Amazon capitalism.” The Cost of Free Shipping provides the first critical, global analysis of Amazon’s power and impact on the world’s economy and its workers.

The true costs of “free shipping” have in fact had enormous consequences on workers, unions, communities, cities, workplaces, and the environment. The book also highlights how workers and o 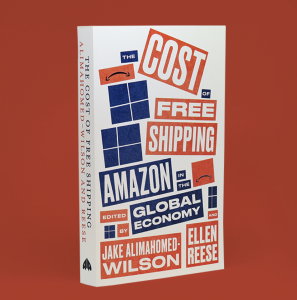 rdinary people around the world are fighting back against the Amazonification of the economy by challenging corporate power and hegemony. Amazon’s increasing dominance over the global economy represents a broader shift in the political economy, described by Wilson and Reese, as “Amazon capitalism.” More information on The Cost of Free Shipping: Amazon in the Global Economy can be found on the Pluto Press website.

Amazon is the most powerful corporation on the planet and its CEO, Jeff Bezos, has become the richest person in history, and one of the few people to profit from a global pandemic. Its dominance has reshaped the global economy itself: we live in the age of ‘Amazon Capitalism’.

‘One-click’ instant consumerism and its immense variety of products has made Amazon a worldwide household name, with over 60% of US households subscribing to Amazon Prime. In turn, these subscribers are surveilled by the corporation. Amazon is also one of the world’s largest logistics companies, resulting in weakened unions and lowered labor standards. The company has also become the largest provider of cloud-computing services and home surveillance systems, not to mention the ubiquitous Alexa.

With cutting-edge analyses, this book looks at the many dark facets of the corporation, including automation, surveillance, tech work, workers’ struggles, algorithmic challenges, the disruption of local democracy and much more. The Cost of Free Shipping shows how Amazon represents a fundamental shift in global capitalism that we should name, interrogate and be primed to resist.