Islamization, Women’s Rights and Feminist Engagement: A Conversation on Afghanistan 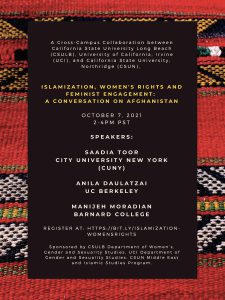 Dr.Toor received her PhD from Cornell University. Her scholarship revolves around issues of culture, nationalism, gender/sexuality, state formation, and international political economy. Her book, The State of Islam: Culture and Cold War Politics in Pakistan was published by Pluto Press in 2011. A special issue of Women’s Studies Quarterly on the theme of Solidarity co-edited by Dr. Toor was published in 2014.

Dr. Anila Daulatzai is a socio-cultural anthropologist and the Chancellor’s Fellow at UC Berkeley. She has taught in prisons, and in universities across three continents. She has been conducting research in Afghanistan as well as with Afghan refugees in Pakistan since 1995. Between 2006 and 2013 she carried out ethnographic fieldwork in Kabul and taught at Kabul University and at the American University of Afghanistan. Her past and current research projects look at widowhood, heroin use, and polio through the lens of serial war.  She is currently completing her book manuscript provisionally titled War and What Remains. Everyday Life in Contemporary Kabul, Afghanistan.

Dr. Moradian received her PhD in American Studies from NYU and her MFA in creative nonfiction from Hunter College, City University of New York. She is the former co-director of the Association of Iranian American Writers. Her book, This Flame Within: Iranian Revolutionaries in the United States, is forthcoming from Duke University Press. Her essays and articles have appeared in Routledge Handbook of the Global Sixties, Scholar & Feminist Online, Women’s Studies Quarterly, Comparative Studies of South Asian, Africa, and the Middle East, Social Text online, jadaliyya.com, tehranbureau.com, Bi Taarof, and Callaloo. She is a member of Jadaliyya’s Iran Page editorial board and a founding member of Raha Iranian Feminist Collective.