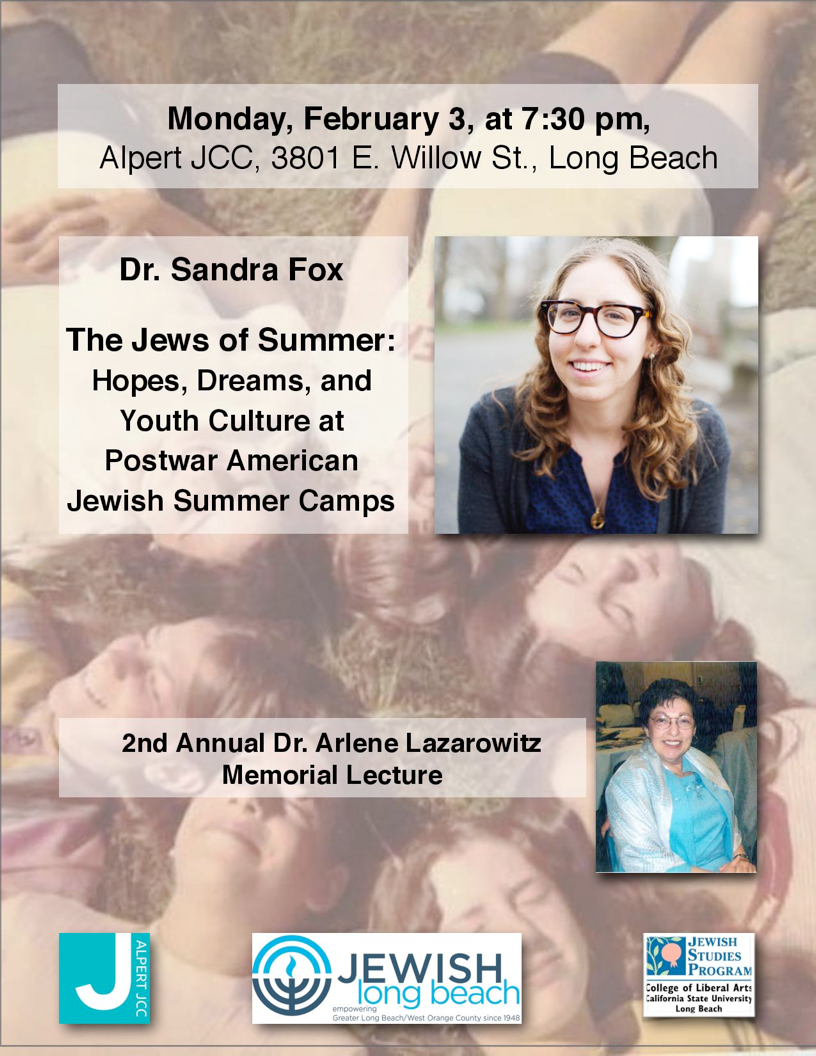 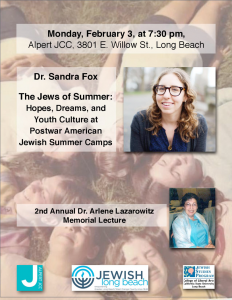 Dr. Fox’s talk will look at American Jewish culture in the decades following World War II, when American Jews climbed the socioeconomic ladder, left urban enclaves for shiny new suburbs in droves, and experienced more social mobility than ever before. But while their new status afforded them many benefits, communal leaders feared that these postwar comforts threatened the vitality of Jewish life in America as they understood it. Projecting their anxieties onto youth, Jewish educators, rabbis, and lay leaders from across the ideological and religious spectrum — Zionist, Yiddishist, Reform and Conservative alike — came to see the immersive, totalizing experience of sleepaway camp as uniquely powerful solution for their communal ills. At the same time, campers and staff members clashed and converged, their intergenerational negotiations shaping postwar American Jewish culture both inside and outside camps’ gates. In this talk, Dr. Sandra Fox will discuss the fantasies that drove the establishment and growth of educational Jewish camping, how educators’ high hopes for camping shaped the lived experience, and how campers responded to these efforts, impacting discourses surrounding Jewish identity, practice, language, nationalism, and intermarriage for decades to come.

Dr. Fox is a Jim Joseph Postdoctoral Fellow in education and religion at Stanford University. Her research considers the lived experience and intergenerational tension in postwar American Jewish summer camps of the Zionist, Yiddishist, and denominational varieties. After receiving her PhD in History and Hebrew Judaic Studies at New York University in 2018, she went on to complete a postdoctoral fellowship at Ben Gurion University’s Institute for the Study of Israel and Zionism, where she worked within a research group devoted to the topic of Israel and American Jewry. In addition to studying the history of Yiddish in America, she is also active within the contemporary Yiddishist community. As the founder and executive producer of  Vaybertaytsh: A Feminist Podcast in Yiddish, she produces contemporary Yiddish content for students and native speakers of all ages and background. She also serves on the editorial board of In geveb: A Journal of Yiddish Studies.

This will also be our second annual Dr. Arlene Lazarowitz Memorial Lecture.  Dr. Lazarowitz founded CSULB’s Jewish Studies Program in 1999 and also established our monthly lecture series at the Alpert JCC.  She passed away in December 2017, and this annual talk celebrates her memory by bringing in noted scholars of Jewish history and political science to speak to the community.

Like all Jewish Studies talks, it is free and open to the public; there is no need to reserve a space.