The Representation of the United States-Japan Relationship in Manga

You are invited to a
CSULB College of Liberal Arts Scholarly Intersections Lecture:

“The Representation of the United States-Japan Relationship in Manga” 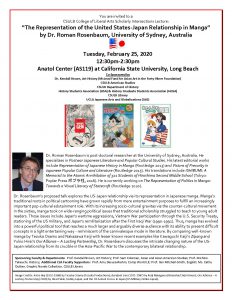 Dr. Roman Rosenbaum is post-doctoral researcher at the University of Sydney, Australia. He specializes in Postwar Japanese Literature and Popular Cultural Studies. His latest editorial works include Representation of Japanese History in Manga (Routledge 2013) and Visions of Precarity in Japanese Popular Culture and Literature (Routledge 2015). His translations include ISHIBUMI: A Memorial to the Atomic Annihilation of 321 Students of Hiroshima Second Middle School (Tokyo: Poplar Press ポプラ社, 2016). He is currently working on The Representation of Politics in Manga: Towards a Visual Literacy of Statecraft (Routledge 2020).

Dr. Rosenbaum’s proposed talk explores the US-Japan relationship via its representation in Japanese manga. Manga’s traditional roots in political cartooning have grown rapidly from mere entertainment purposes to fulfill an increasingly important pop-cultural edutainment role. With its increasing socio-cultural gravitas via the counter-cultural movement in the sixties, manga took on wide-ranging political issues that traditional scholarship struggled to teach to young adult readers. Those issues include Japan’s wartime aggressions, Vietnam War participation through the U.S. Security Treaty, stationing of the US military, and Japan’s remilitarization after the First Iraqi War (1990-1991). Thus, manga has evolved into a powerful political tool that reaches a much larger and arguably diverse audience with its ability to present difficult concepts in a light entertaining way – reminiscent of the carnivalesque mode in literature. By comparing well-known manga by Tezuka Osamu and Nakazawa Keiji with lesser known recent examples like Kawaguchi Kaiji’s Zipang and Yukio Hirai’s Our Alliance – A Lasting Partnership, Dr. Rosenbaum discusses the intricate changing nature of the US-Japan relationship from its crucible in the Asia-Pacific War to the contemporary bilateral relationship.