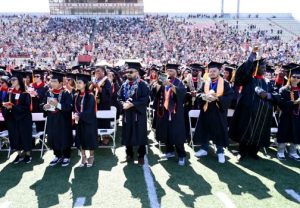 Long Beach City College graduation ceremony allowed students from 2020, 2021, and 2022 to walk the stage for the first in person commencement since 2019, in Long Beach on Thursday, June 9, 2022. (Photo by Brittany Murray, Press-Telegram/SCNG)

Assistance League of Long Beach has been mentoring under-served students through its CAMEO auxiliary program for more than 35 years.

The three-year program pairs a volunteer with a student from either a Long Beach high school or Long Beach City College and helps them to identify and achieve college and career goals.

Long Beach State history professor Ulices Piña read about the program and contacted league officials to offer his services. What he didn’t know was that he would become the first male to join the league and the first male to mentor a student. 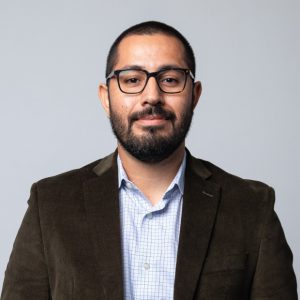 Piña spoke to Ellen Calomiris, the 2021 membership chair, who was delighted to include him in the program.

“With societal changes and Assistance League of Long Beach’s desire to be more inclusive and diverse, the organization was open to expanding its membership to include men,” Calomiris said.

And for his part, Piña said he wasn’t taken aback when he was told he would be the first male in Assistance League history.

“It’s a really welcoming environment,” he said. “I feel like my opinion has been valued and that I’m part of the organization.”

Many students who go through the program are first in their family to attend college; so it was with Piña, whose parents are from Colotetlan in the state of Jalisco.

“My parents came from Mexico to Long Beach in the ’70s and only had a sixth grade education,” Piña said. “I relied on my high school track coaches to help me learn about and apply to college.

“Their mentoring was instrumental for me,” he added. “They taught me to take chances I wouldn’t have known about. It encouraged me and taught me how to form goals, how to follow through. As a professor, this is essential to the job I do.”

A graduate of Long Beach Poly High School, Piña received his bachelor’s and master’s degrees at UC Riverside and his Ph.D. in history at UC San Diego. He teaches Modern Mexico, Latin American Nations and History of Social Activism at CSULB. Additionally, he is one of nine people selected by The Institute for Citizens and Scholars for a 12-month fellowship that helps professors from marginalized groups stay in academia.

The first year of mentoring wasn’t easy for Piña or his mentee, Angel, 16. Their meetings were done using Zoom, phone and texting. Both agreed it wasn’t the best way to get to know someone, but they made it work.

“It’s been a joy to mentor and build trust with my mentee,” Piña said. “Over the past year, I’ve seen him growing into his own. He’s a curious, intelligent young man and seeing him grow makes me try harder.”

Finally, in September 2021, they met in person at an orientation meeting.

“He introduced himself and I talked to him about high school,” Angel said. “He told me he was the first male mentor. He made the program sound interesting for my mom. He was a trustworthy guy.”

Angel told Piña he wanted to be a chef. For the last year, Angel has been a busboy. But now the Cabrillo High School student is thinking about other occupations.

“Now that I have some real-world experience and I have a checking account, I was thinking about law enforcement or being a firefighter,” Angel said.

“He’s really helpful,” he added. “I see him as someone I will be friends with for the rest of my life.”

Approximately 30 students per year who are likely college-bound, but who face some obstacles, are encouraged to apply to the CAMEO program. Monthly workshops deal with issues such as etiquette or finances or career opportunities. When students complete a year of workshops, they get a stipend; if they meet Assistance League standards after three years, they can get a scholarship.

CAMEO is run by volunteers and is fully funded by an annual Fashion Show and Luncheon Fundraiser that is scheduled for March 18, 2023. To attend the fundraiser or find out about becoming a mentor, email CAMEO@allb.org or go to www.assistanceleague.org/long-beach/membership/cameo/.