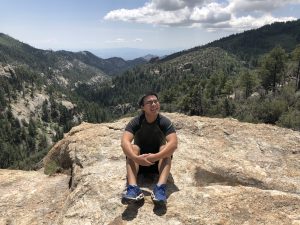 Dr. Wenjie Ji will be making his professorial debut this fall when he joins the department of geography.

In 2010, Dr. Ji earned his bachelor’s degree in engineering, geo-information science and technology at Tongji University in Shanghai, China. Soon after, he moved to New York to pursue his doctorate in geography at the University of Buffalo, where he also gained experience as a research assistant.

Dr. Ji has been presenting his research at conferences and lectures since 2014. He has appeared as a guest lecturer at New Mexico State University and Buffalo State University, where his teachings focused on remote sensing and plant diversity. Additionally, he has shared his research with fellow academics at conferences like the Ecological Society of America Annual Meeting and NASA Terrestrial Ecology Science Team Meeting.

Before joining the CSULB faculty, Dr. Ji was a postdoctoral research associate at New Mexico State University. In that capacity, he was involved in two NASA-funded research projects using light detecting and ranging satellite systems to measure the vertical structure of plants from space. He believes that getting involved in research is extremely important for students.

“[I want to] inspire one or two of them to take part in scientific research and in a community,” Dr. Ji says.  “The world really needs it right now.”

He decided to switch gears and  become an educator because he wants to lead his students by example. He says he looks forward to building a community of researchers and scientists at CSULB.

“I feel that having a good education is essential to any student,” Dr. Ji says. “I think a good class, or even just one good instructor, changes a lot. I want to inspire the next generation of scientists.”