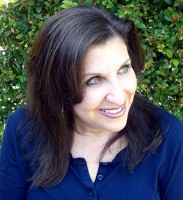 Lisa Glatt, a longtime member of the English Department, recently saw the world rights to her new novel The Nakeds acquired for Regan Arts.

The novel, set in 1970s California, centers on the impact a hit-and-run accident has on the driver and victim. The family drama is slated to be published in June. Glatt’s previous two books, the bestseller A Girl Becomes a Comma Like That and the story collection The Apple’s Bruise, were both published by Simon and Schuster. Film rights to The Nakeds have been optioned by producer Steven Shainberg (“Secretary”) who is planning to direct the movie adaptation.

Glatt, a member of the university since 2000, was excited by the acquisition.

“I’m a fan of Steven Shainberg’s previous films, especially ‘Secretary,’ which is based on a Mary Gaitskill short story from her collection Bad Behavior,” Glatt recalled. “I remember reading that collection when it was published and being struck by Gaitskill’s prose and material. Shainberg also did a film called ‘Fu’’ based on the photographer Diane Arbus. His interest in unusual, complicated, bad-girl-women impresses me. “

Glatt will accompany her novel’s appearance with readings in Los Angeles, San Francisco, Portland, Philadelphia and New York. “Of course, there will be Long Beach events and a party, too,” she said.

Glatt feels writing A Girl Becomes a Comma Like That helped to prepare her to create The Nakeds.

“Everything I’ve written before—even when that writing goes unpublished and sits sadly on my computer—informs and influences and strengthens what ends up in the world,” she said. “Of course, the work that is talked about and reviewed has a cover, a spine and a publisher but so much of my writers’ life is occupied by unpublished work—work that is important because it’s the practice and exercise for what might see publication. I was lucky in that A Girl Becomes a Comma Like That was well reviewed, so I was able to imagine light at the end of the writing-tunnel. My friend and colleague Suzanne Greenberg says that it’s important to remind oneself of what’s been accomplished now and then, and I heed her advice.”

Glatt and Greenberg co-wrote two children’s novelsAbigail Iris: The One and Only followed Abigail Iris: The Pet Project, both from Walker Books/ Bloomsbury USA. Her husband David Hernandez, who teaches at CSULB and CSU Fullerton, recently saw his fourth collection of poems Dear, Sincerely accepted for publication by the Pitt Poetry series. Glatt followed her CSULB bachelor’s with a Master’s of Fine Arts from Sarah Lawrence College. She returned to CSULB’s faculty in 1992 before joining UCLA’s writer’s extension program then rejoining the university in 2000.

Glatt is pleased with her relationship with her publisher.

“I’m going out to New York at the end of March to meet them all, but right now, I feel like I’m getting to know them by the close work we’re doing together,” she said. “My editor, Ron Hogan, has been involved in writing about books on the internet for many years and is the founder of the website Beatrice and the blog Galley Cat. He’s been supportive of so many writers for so long and it’s a wonderful experience to be among his first projects at Regan Arts.”

Setting The Nakeds in the 1970s was a challenge in itself.

“The Nakeds is very much a novel, meaning that I’ve put story before fact, but some of what I’m exploring in the book is autobiographical, as is the way with many fiction writers,” she said. “Many things in the book, although fictionalized, spring from my own experience of growing up in Southern California during that time period. I’m always happy when I see Los Angeles or California represented in books and on TV—and feel an affinity with those writers who’ve seen the richness of the West Coast and done their best to make use of it.”

“The main character in the novel, Hannah Teller, is hit by a car in Manhattan Beach, but the family moves to Long Beach soon after, so our city makes more than a small appearance,” she said.

Glatt is grateful for the support she has received from the English Department.

“Having a secure teaching job where I’m introduced to new writing students every semester is one of the joys of my life,” she said. “The English Department and CSULB granted me a sabbatical a few years ago and I am forever grateful because that time made writing The Nakeds possible.”