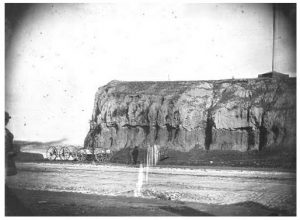 History Faculty member, Patricia Cleary received a fellowship from the National Endowment for the Humanities (NEH) for 2020-2021 to work on her next book, Mound City: The Place of the Indian Past and Present in St. Louis (under contract with University of Missouri Press). Below is a brief introduction:

In the mid-1800s, early daguerreotypist Thomas Easterly documented the physical transformation of St. Louis, Missouri, with striking images full of buildings, roads, and railways. While visually recording urban expansion, Easterly also chronicled the physical disappearance of St. Louis’s indigenous past. Perhaps the most striking reminder of earlier inhabitants was the Big Mound, a massive earthen structure over 300 feet long, 100 feet wide, and 30 feet tall. Part of a ceremonial district erected by Mississippian Mound Builders hundreds of years earlier, it was the largest of over two dozen mounds that dominated the skyline and gave the early city its claim to fame. During the nineteenth century, all of these monumental earthworks—except one outlier—were razed. This project explores the life, death, and afterlife of the mounds, exploring their cultural significance for both ancient and contemporary indigenous peoples and non-Indian peoples as well. It examines both the literal destruction of Indian cultural artifacts and the narrative erasure of Indian peoples in histories of the city’s development.