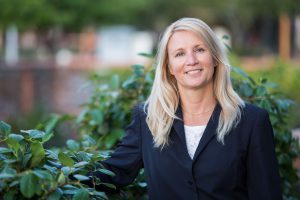 Madeleine Liseblad first came to California from Sweden when she was 16 years old. This fall, she’s returning as a professor in the journalism and public relations department.

Before joining academia, Dr. Liseblad worked as a journalist in television, radio, newspapers, magazines and digital media. She also spent 15 years as a PR professional and served as the corporate spokesperson for Volvo Cars.

She says her organizational skills married with her fascination for the journalism and PR industry paved the way for her eventual return to academia, but this time as a professor.

“I went into teaching because I love students,” she says. “I just want to make a difference.”

In 2020, Dr. Liseblad was recognized for her exceptional service by the Association for Education in Journalism and Mass Communication. Her book, “American Consultants and the Marketization of Television News in the United Kingdom,” developed from her dissertation, was published in 2020.

Recently, she joined the Dean’s Advisory Council on Diversity, Equity and Inclusion at ASU.

“I think that you can learn so much more from people who are different from you,” Dr. Liseblad says. “I just love the setting that the Cal State system has, in terms of the diversity and the student body.”