College of Liberal ArtsFeaturedKeats in San Francisco & Other Poems

Keats in San Francisco & Other Poems

CLA is proud to announce and congratulate Paul Kareem Tayyar on his new book release. 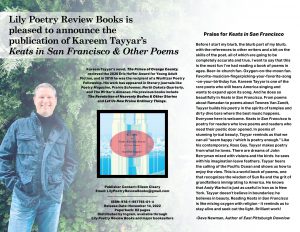 English department lecturer, Paul Kareem Tayyar has just had his new book released, Keats in San Francisco & Other Poems, by Lily Poetry Review of Books. Tayyar’s novel, The Prince of Orange County received the 2020 Eric Hoffer Award for Young Adult Fiction and in 2019 he was the recipient of a Wurlitzer Poetry Fellowship.  His work has appeared in literary journals like Poetry Magazine, Prairie Schooner, North Dakota Quarterly, and The Writer’s Almanac. His previous books include The Revolution of Heavenly Bodies & Other Stories and Let Us Now Praise Ordinary Things.

Praise for Keats in San Francisco & Other Poems

Before I start my blurb, the blurb part of my blurb, with the references to other writers and a bit on the skills of the poet, all of which are going to be completely accurate and true, I want to say that this is the most fun I’ve had reading a book of poems in ages. Beer-in-church fun. Oxygen-on-the-moon fun. Favorite-musician-fingerpicking-your-favorite-song-on-your-birthday fun. Kareem Tayyar is one of the rare poets who still hears America singing and wants to expand upon its song. And he does so beautifully in Keats in San Francisco. From poems about Ramadan to poems about Townes Van Zandt, Tayyar builds his poetry in the spirits of temples and dirty dive bars where the best music happens. Everyone here is welcome. Keats in San Francisco is poetry for readers who love poems and readers who need their poetic door opened. In poems of stunning lyrical beauty Tayyar reminds us that we can all “seem happy / which is poetry enough.” Like his contemporary, the excellent Ross Gay, Tayyar makes poetry from what he loves. There are dreams of John Berryman mixed with visions and the birds he sees with his imagination leave feathers. Tayyar hears the calling of the Pacific Ocean and shows us how to enjoy the view. This is a world book of poems, one that recognizes the wisdom of Sun Ra and the grit of grandfathers immigrating to America. He knows that Andy Warhol is just as useful in Iran as in New York. Tayyar doesn’t believe in boundaries; he believes in beauty. Reading Keats in San Francisco is like mixing oxygen with religion—it reminds us to stay alive and seek out the light. Brilliant work!