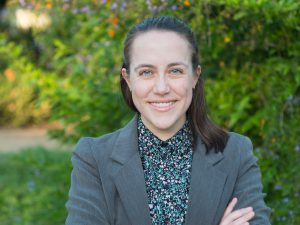 When Dr. Anna Bax first saw the job description for the faculty appointment she’ll fill in CSULB’s linguistics department this fall, she immediately knew it was the job for her. It perfectly described the linguist she wants to be, she says.

The linguistics department at CSULB is a collaborative one, she says, which means she’ll be able to expand her research. She’s not only a sociocultural linguist, but is also involved in language documentation and revitalization, as well.

Her expanded opportunities with the department were a big part of the reason that she chose CSULB, but there was another important factor that helped solidify her choice:  the department’s orientation for social justice. She says it’s important not only to her, but also for the field of linguistics. “Linguistics is not apolitical and language is not apolitical, and this department recognizes that,” she says.

Starting in the fall, Dr. Bax will be teaching courses in The Nature of Language and Language and Social Justice.

“The department of linguistics at CSULB is really well established,” Dr. Bax says. ”There are a lot of amazing scholars who I’m excited to call my colleagues.”

Her academic career started at Pomona College, where she found her interest in linguistics and earned her bachelor’s degree in the subject. She then moved up to Santa Barbara, where she taught and obtained her master’s and doctorate degrees in linguistics from UCSB.

In her time at UCSB, she became passionate about studying Mixtec languages, a group of languages that have migrated to the U.S. from La Mixteca of Oaxaca in Mexico. Her interest in the community grew because a number of the Mixtec people were present in Oxnard and Ventura County, near UCSB.

With the rise in Mixtec languages in the U.S., Dr. Bax found an opportunity to help a language that wasn’t receiving any institutional support. “There are 20,000 people living in this community, speaking these languages, and yet there’s no support for court translators, school translators, medical translators,” she says.

Since 2015, she has been working to provide a support system for Mixtec languages. She has helped document the language in order to better understand it and its many variations, and she’s worked directly with Mixtec speaking community members to find out how their language affects their experience in the U.S.

It’s all part of an even bigger problem she’s fighting: language endangerment, or societal pressure that suppresses language. It’s something that has killed languages in the past, she says, and she is trying to prevent it from happening in the Mixtec community.

Working at CSULB, she will continue her efforts to help the Mixtec community. She hopes to expand her reach to the Long Beach community, researching cultural languages in the areas around the university.

Dr. Nancy Hall, chair of the linguistics department, says she’s proud to have Dr. Bax join the department. “We were greatly impressed with her intellect and scholarly contributions, her commitments to minoritized language communities, her collaboration with community members and students, and her mentoring, advocacy and recruitment of students from indigenous communities in the U.S. and in Mexico,” Dr. Hall says.

Another goal Dr. Bax hopes to accomplish at CSULB is expanding the understanding of linguistics by including multicultural speakers in the profession. “There’s a lot of white people and settlers studying indigenous people and people of color’s language,” she says. “My hope for my time at Long Beach is to be able to recruit students to linguistics who are themselves speakers of [all types] of languages.”

Her ultimate goal is to have “a thriving community within the linguistics department of students who have personal connections to what they are studying, and who wanted to use the tools of linguistics not only to fulfill their goals, but to transform what linguistics is and what it can be.”