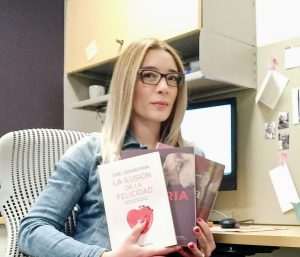 Dr. Giulia Togato studies the relationship between psychology and translation, subjects that are vital to the way we communicate and understand each other. Now that she’s joined the faculty of the Romance, German, Russian Languages and Literatures department at CSULB, she’ll  finally have the opportunity to teach and research both topics at the same time.

“Here, I could mix my two main strengths,” she says. “I don’t have to separate them.”

Her hiring is part of a plan to build the translation studies program that the linguistics department launched in fall 2019. The program helps students find jobs in language services, where they can work as translators in the entertainment industry, community interpreting, and other related fields.

“The goal is to have a master’s in translation studies,” Dr. Togato said about building the program. “To include more languages, to include more courses, and then to build a master’s program.”

She will help the department move toward this goal in part by creating a proposal for a new course in psychology of translation, the subject she has studied the most and is most determined to teach.

Before landing at CSULB, Dr. Togato taught psycholinguistics at the University of Granada in Spain and translation at Penn State University.

Dr. Togato, who is teaching Meaning in Transit and Translation Ethics, Theory and Practice classes this fall, has always been interested in the field of translation, noting that “communication is the basis of everything.” Her motivation to study the psychology of translation was rooted in her desire to better understand the importance of translation and its role in society.

“There are huge differences in how the brains work,” Dr. Togato says. “For example, bilingual [people] have advantages in cognitive control, while translators have advantages in verbal tasks. I was interested in identifying what the perfect training for a translator should be.”

She emphasized the importance of identifying the differences between bilingual people and translators as vital to understanding what makes a good translator. Ultimately, she says, this will lead to a dynamic education for CSULB students.

Her experience traveling from Italy to Spain, then to the U.S., have motivated her, not just to learn more about her field, but also about the human experience. “The more different another person is from you, the more you will learn,” Dr. Togato says. “If we were all the same, that would not make any sense.”

It’s part of the reason Dr. Togato was so eager to join CSULB: to experience the diversity of the campus and the effect diversity has on the way people interact. As soon as she stepped on campus, she was fascinated by the way students interacted with one another, “just mixing and talking and not thinking about the color of the skin or the eyes. For me, I’m in my sauce, [as] I would say in Italy.”

Dr. Clorinda Donato, director of the Clorinda Donato Center for Global Romance Languages and Translation Studies, says that Dr. Togato’s experience and knowledge make her an ideal fit for the appointment.

“Giulia Togato brings years of experience as a translation professional and professor,” Dr. Donato says. “Her combined knowledge and experience in both academia and the translation industry will prepare our students with the foundations they need in translation studies, as well as bridges to the world of employment.”