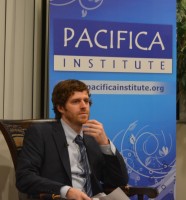 Dr. Mahoney is assistant professor of political science at California State University, Long Beach. His research focuses on United States foreign policy, terrorism, insurgency, and counterterrorism. Professor Mahoney received his BA with highest honors in history from Williams College in 2001, and his PhD in international relations from UCLA in 2011. At UCLA, he was the recipient of a University of California Dissertation Fellowship as well as a dissertation grant from the UC Institute on Global Conflict and Cooperation. From 2011-2013, Dr. Mahoney was faculty fellow lecturer in the Department of Political Science at UCLA. His recent work examines the growth of small insurgent organizations, the different types of audiences that terrorist groups attempt to influence, why terrorist groups claim credit for some attacks and not others, and the relative efficacy of different strategies used by insurgent organizations.

Dr. Mahoney first discussed the way in which we conceptualize terrorism, breaking it up into three categories of individual terrorism, organizational terrorism, and state terrorism. Terrorism is defined as “violence or threats of violence targeted against civilian noncombatants for the purposes of achieving a political or social objective, and intended to influence several audiences.” He goes on to distinguish terrorism from violent crime, which does not have a political or social objective; guerilla warfare, in which the target is different; and insurgency, in which a non-state group seeks control of the government and governed territory. However, insurgent groups often use a combination of terrorism, guerilla warfare, and non-violent tactics. Mahoney gave the examples of Hezbollah in the 1980s, FARC in Colombia, the Tamil Tigers, and, most recently, the Islamic State group (ISIS).

Mahoney then went on to address the threat posed by terrorism, stating that since 1970 there have been around 125,000 terrorist attacks, and that about half of them involved no fatalities. Only two percent of the attacks involved twenty or more casualties. Those attacks are different from catastrophic terrorist acts, which are very infrequent, but have the potential to cause significant damage, both in casualties and in their social and economic impact. Catastrophic terrorist attacks are those that the United States government is worried may occur in the future. Mahoney stated that a lot of time in counterterrorism is spent brainstorming and preparing for the “unknown unknown”, attacks that had not been contemplated and will shock society in a fundamental way, such as the Pearl Harbor and 9/11 attacks.

Dr. Mahoney discussed the counterterrorism policies of the Bush and Obama administrations. Because the Bush administration considered Iraq as a state sponsor of terrorism, the United States intervened in Iraq in 2003. In so doing, the U.S. became involved in counterinsurgency, and the emergence of ISIS following the withdrawal of U.S. troops has left the Bush decision to invade Iraq in a critical position. Other policy tools include the NSA’s mass surveillance program, the implementation of drones, the creation of of huge counterterrorism bureaucracy symbolized by the Department of Homeland Security, and a massive amount of spending in counterterrorism efforts. All of this was categorized under the rubric of the “war on terror.” The Obama administration augmented the drone policy and continues the surveillance program operated by the NSA. However, putting “boots on the ground” and the “hearts and mind” nation building project is not a part of Obama’s counterterrorism policy. Dr. Mahoney closed by addressing a few issues in counterterrorism today, such as what the United States can do about ISIS, the privacy versus security debate, and the costs of counterterrorism.

Pacifica Institute thanks Dr. Mahoney for his phenomenal lecture, and for our guests in participating in an insightful discussion.