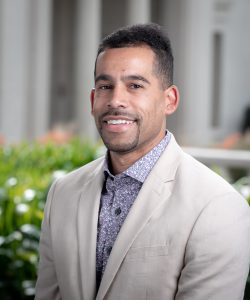 Dr. Matthew Lesenyie is a professor with a story that plenty of CSULB students could relate to. From humble beginnings, he worked odd jobs throughout his college career and juggled classes with internships. It all ultimately led to CSULB, where he is joining the faculty in the political science department in the College of Liberal Arts this fall.

Dr. Lesenyie started his academic career at MiraCosta Community College, where as a freshman he found his interest in politics. He transferred to UC Davis, where he received his bachelor’s degree, and ultimately his doctorate, in political science.

Along the way, he got to see the political process first-hand in Sacramento while working at Gov. Arnold Schwarzenegger’s Office of Constituent Affairs and the Office of Planning and Research and in the Office of the State Assembly Chief Clerk. He also received several awards, including the Marvin Zetterbaum Award for Excellence in Graduate Student Instruction and the Dean’s Prize for Best Oral Presentation in Social Sciences.

Underneath his success lies a great deal of hardship. When Dr. Lesenyie was 14, his father died.

“What I really missed was having a father figure to watch all my success and give me those little bits of advice along the way,” he says. “My friends, they got a dad to lean on at age 23, or age 26, who can just say ‘Don’t trust that person’ and ‘Don’t do that with your money.’”

His mother became an alcoholic, and throughout school, he took care of her, but balancing school and home life became one of his toughest struggles, and he had to make a devastating decision.

“I couldn’t do both. It took me years to figure that out,” he says. “Pretty much my working life before grad school, I did a lot of taking care of my mom. I went to grad school in 2009, and really that’s the last year I tried to lean in and save my mom.”

His decision made success that much more important, and his academic record is a testament to his persistence as a hard worker. Not only that, but the lessons he learned while growing up and struggling in college are ones he says he reflects on in the classroom as a professor.

He began teaching as an associate instructor at UC Davis in 2016. The subject he took on — race politics — hadn’t been taught at the university in about 20 years. He almost didn’t want to teach it, he says.

“There are a lot of reasons why people don’t teach that class,” he says. “I think there’s a lot of folks who feel like they can’t. But the other thing, the most insidious part, which could be in the class itself, is because political science is dominated by a white upper-class.”

His colleagues described teaching the subject as a “career killer,” and because of the pressure, he almost opted out, too. In the end, though, he couldn’t let himself.

His decision to teach the course was much more than just a statement: It led to results. “Out of all my classes, more people have gone to law school from that class, which I think says a lot about the people who want to take it, who already have the orientation towards social justice,” he says.

Dr. Lesenyie’s desire to teach race politics eventually led him to join the faculty at CSULB, where he will be teaching that subject, along with Intro to American Government.

Other universities have had the chance to hire him full-time as a race politics professor, he says, but chose not to. “It was like a hiccup in the direction of ‘Hey, we need to change,’ and then they didn’t do it,” he says. “Long Beach did not have that hiccup. They charged forward.”

Dr. Teresa Wright, chair of the political science department, says of Lesenyie, “He’s the whole package: a terrific scholar doing important and timely work, a natural teacher who sees teaching as a vocation, and a sterling colleague with an impressive record of community service.”

Growing up in Section 8 housing, Dr. Lesenyie says he saw the police and ambulance multiple times every day. He dreamed of understanding the institutions of the world and how they affected not only his own life, but the people around him.

“It is so exciting to me to understand why that was and to explain it to people who otherwise would hear the truth from Tucker Carlson,” he says. “It’s really cool to be that expert. This is the expert I’ve always dreamed of being, and now as a job, I get to educate people on the truth. It’s friggin’ awesome.”