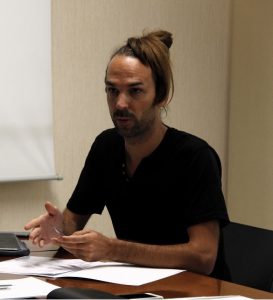 Dr. Adrià Martín-Mor is moving from Barcelona to Long Beach to join the romance, German, Russian languages & literature department as an assistant professor this fall.

Dr. Martín-Mor, who knows several languages, will focus on romance languages at CSULB. Previously, he taught at universities in Barcelona, as well as at the University of Cagliari on the island of Sardinia.

Dr. Martín-Mor’s area of expertise is translation technology, which is meant to help translators do their work more fluidly and faster. His research interests focus on minoritized languages, such as Sardinian and Catalan, and how technology can help these languages survive. He likens the emergency in language to the climate emergency.

“Both processes lead to desertification,” Dr. Martín-Mor says. “So it’s these disappearing languages and environments that are contributing to our less diverse and plural world—both in the field of biology or environmental, and also in the field of cultures and languages. What I try to do is use technologies to help those languages get some time.”

Outside of academia, Dr. Martín-Mor combined his love of language with his love of music to create a TV show, “Come With Me,” broadcast in Italy. While traveling around the island of Sardinia with his van and guitar, he met with people committed to linguistic and cultural diversity.

Though his doctorate in translation, with a specialization in translation technology, is uncommon in the United States, it is well-established in European universities. He is excited to bring his expertise to CSULB,  as well as learn from the people, culture, and languages of Long Beach.