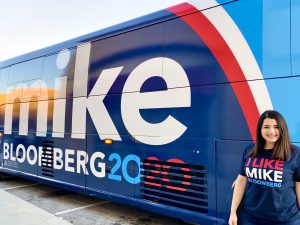 Suzan Al Shammari’s first introduction to a working environment in communication was through a social media position for Long Beach Mayor Robert Garcia during her freshman year. She recalls being very persistent with sending follow up emails after sending in her application, saying “Every week, every two weeks, I would check in and I would email and eventually the mayor was just like, ‘Bring her in. She’s not gonna stop emailing until we bring her in!’” While her persistence got her the interview, she credits her Communication Studies skills for getting her the job, saying, “I used the skills that I learned in school of how to interview, how to be charismatic, how to ask questions to your employer, and how to really show them that you are the best candidate for that job.” Since then, she has utilized her professional and interpersonal skills to work in the political sphere. As an undergrad, she interned for the Port of Long Beach as their Lead Communications Fellow. Right after finishing her master’s program in London, she moved to New York to work as a Government Relations Specialist for a non-profit organization aimed at helping refugees and immigrants. By the end of 2019, she was offered a position to direct the Bloomberg Presidential Campaign in Orange County. 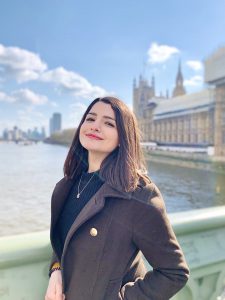 Suzan credits the application of the knowledge and skills and needed for her success to her Communication Studies degree and experience with the Honors program. She says, “I really would say everything that I have done in my undergrad career at CSULB has led me here, to today, to what I’m doing.” She describes her undergrad experience as a very challenging, motivating, hands-on experience where she was able to lean on her professors for guidance and support. She fondly remembers attending office hours for help with quantitative research with Dr. Adam Khan, whose patience and affirmations helped her succeed in his class and helped her realize that she is better suited for qualitative research. With that knowledge, she was able to better navigate her honor’s thesis and graduate school research.

While doing research during her study abroad in the United Kingdom, she turned to her honors program advisor Dr. Caitlin Fouratt, who she says was there for her at every step of her honors research project even though they were in different countries. The instruction she gave about the research process helped her complete her thesis and move on to grad school. With the research experience from writing her honor’s thesis under her belt, graduate school at University College London was “a piece of cake.” She demonstrated that by finishing her program in nine months instead of twelve, which allowed her to find a job to start right after graduation.

To this day, Suzan remembers all the practical skills she learned in her first Communication Studies class with Professor Dawn Kelsey about interviewing, resumes, and attention to detail. She says, “I’ve learned so much more in undergrad than I did in postgrad and those real-world skills are staying with me.” The skills she gained proved necessary for the different jobs she has had in her career. As a Government Relations Specialist, she used her articulate writing skills when working on federal proclamations, state and federal bills, as well as press releases and briefings. She utilized her well-trained knowledge of public speaking, persuasion, and argument when she testified in front of City Council. As for campaigning, she says “you definitely use a lot of communication skills, because you’re running a campaign and it’s all about persuasion, navigating through the field offices, and managing students and people from all backgrounds. You need to be that person who can solve the crisis—we go through many things, each day is different—and be able to mediate relationships within the office.” The professional demeanor and diplomacy skills that came with her degree were well utilized.

Majoring in Communication Studies not only helped her gain practical skills for her career, but it also helped her gain a better understanding of herself along the way. Suzan had struggled with her cultural identity since she was born in Iraq, lived in Egypt, then moved to the United States. Then she took an Intercultural Communication class with Dr. Jessica Abrams, who helped shift her perspective. Suzan says, “[Dr. Jessica Abrams] was telling me, ‘Well you are how you are because of your lived experiences, and that’s great; That’s something to be celebrated.’ For somebody to really teach me to embrace who I am, embrace my identity, embrace the kind of confusion—even the small confusion that comes with identity when you grow up in different cultures—That’s something she was teaching me to embrace and celebrate.” This important lesson, along with the pride and confidence that it inspires, stays with her.

Apart from the help she received from her professors, another key to Suzan’s success has been her mentality. With pride in her accomplishments and her confidence in her degree, Suzan also holds onto the belief that success is never just a straight shot—it’s a zigzag. She takes on opportunities as she sees them and utilizes her skills at every step. Though some moves might be risky, she recognizes that these risks are also opportunities to demonstrate growth and resilience. She says, “I think Liberal Arts is really what you make of it. You can mold it to be something so extraordinary and so great, or you can be just like any other student and just not take advantage of it, and not make it worth it, and not make it great.” She emphasizes that one way she did this was through taking advantage of the scholarship opportunities provided by CSULB. Describing herself as a “scholarship student,” Suzan strongly recommends that students search and apply for scholarships as well. One key award she was given was the Rotary Global Grant, which funded her master’s education. 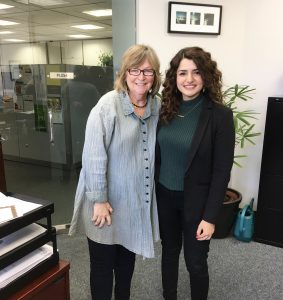 Like many CLA major students, Suzan dealt with her fair share of doubts from other people about the utility of her degree in the workforce. Thanks to her classes and professors, she knew exactly how to respond. She says, “People were like, ‘Oh, Communication Studies, what are you gonna do with that?’ I’m like, ‘Let me tell you, you can actually do a lot of things. What company do you work for? I bet you probably have a Communication department. Everything that you see right now, all that facilitation—whether it’s in politics, government, or even day-to-day life—has an aspect of communication and strategy to it.’” She emphasizes that a wide variety of jobs require strong oral and written skills that come from an education in Liberal Arts. If she didn’t choose to work in government and politics, she would still have many other doors opened for her to choose from—including law, healthcare management, and marketing—thanks to the flexibility that comes with her degree. She says, “having a Liberal Arts degree as an undergraduate is a very handy tool. You just need to learn how to use it.”

Suzan is confident that these jobs will still be necessary, even during these times of uncertainty. She strongly encourages students, especially graduating seniors, to apply for jobs despite their doubts, since many people have those same doubts and might not actually follow through. She notes that the pandemic is making everyone struggle, but it is important to not give up. She says, “What helped me—what’s helping me now—is trying to be positive and thinking, well, I’ve completed my education, I have two degrees, I have a good work resume, and I’m able to do something I love.” While these times might be difficult for everyone, we must do the best we can to keep a positive mindset on continuing to strive for our goals and continue progressing on that zigzagged road to success.

As for her final words of advice, Suzan says, “As candid as I can be, I would say, ‘Be a badass at what you do!’” What we can take from her statement is that we should strive for the lives we authentically want to lead with a sense of passion, dedication, and focus.