The Family Legacy of the Hauth Center and the Hauth Lobby 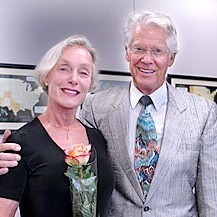 The Hauth Center was developed by Luster E. Hauth and his wife, Audrey Hauth. Luster was a professor in the communications department at CSULB and he realized students needed more attention when it came to practicing public speaking. It was a difficult service to provide as a professor with many students across multiple classes. After retiring as a professor, Luster and Audrey decided to create the Hauth Center for Communication Skills. Audrey Hauth is a CLA alum and helped develop the Hauth Center mission statement that reads, “while enjoying life to the fullest and with a humanitarian spirit, the Hauth family mission focuses on family unity, love, and loyalty as we strive to make our world better.”

Luster E. Hauth passed, but his legacy lives on through his wife Audrey and their two daughters, one named Sheree Hauth. Audrey and Sheree continue to be involved in the CSULB community, carrying on Luster’s vision of giving back by helping students and improving educational resources. The Hauth’s have also set up two fellowships for student employees at the Hauth Center. Students can apply each year in March for either the Luster E. Hauth fellowship or the Audrey Nichol Hauth fellowship. 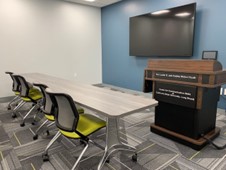 One of the Hauth Center’s larger rooms to simulate presenting in front of a classroom.

Overseeing the fellowship students and the other peer consultants are Director Jamie Wiles and Assistant Director Eddie Ayala. Wiles and Ayala work to supply the service Luster E. Hauth saw was lacking on campus. The Center averages 1,000 students per semester. Director Wiles says, “My hope is that the Hauth Center can help them find their voice as a speaker! I hope we continue to be a connection to campus for students outside of their classes. I want the center to be a safe comfortable space for students to work on what matters most: communicating and connecting with others!” The future of the Hauth center will include partnering with the business department to send 800 business students a semester to help them with their business pitches and presentations.

Audree and Sheree Hauth have gone beyond the Hauth Center and contributed to the creation of the Hauth Lobby in the new Anna W. Ngai alumni center. The center recently had its grand opening and the Hauth Hall is now open to visitors. Audree Hauth hopes, “the alumni center will aid others to come back to CSULB and enjoy the Hauth lobby.”

Both the Hauth Center and the Hauth Lobby help students with professional development. The center teaches communications and presentations, and the Lobby creates a space for networking. Neither the center nor the lobby would be possible without the contributions of the Hauth family. Audrey and Sheree are active in the community and CLA is proud to have them as part of the Long Beach family.