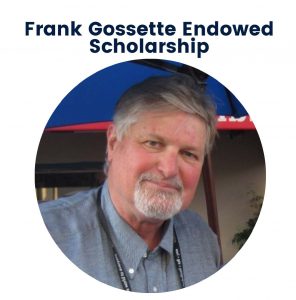 The Frank Gossette Endowed Scholarship is officially open for fall semester applicants! This scholarship is for Geography majors within the master’s program at CSULB (California State University Long Beach). The scholarship supplies funds to support a student’s research project, and this can apply towards a student’s thesis to help further professional goals, while working on a project they are passionate about. Students have from now until October 3rd to apply and details for the application will be in the link below. However, before applying it is always important to know the donor and why they set up the scholarship in the first place.

Frank Gossette was a CSULB Professor from 1985 to 2009. He is now retired but keeps his title as an honorary professor. His higher education includes earning a Master’s in Sociology and Asian Studies from the University of Oregon, along with an advanced diploma in Chinese Mandarin from the Defense Language Institute Foreign Language Center. He then went on to earn his Ph.D. in Geography from University of California- Los Angeles (UCLA).

Gossette contributed and was heavily involved in the Geospatial Science field, a discipline that focuses on using technology to gain greater understanding of people, places, and the processes of Earth. To this day, he works as a freelance consultant for Geographic Information Systems. Gossette also established the Geospatial Science field at CSULB, which eventually led to him starting his scholarship so he could continue supporting student-led research at the master’s level. His scholarship and program have helped students gain internships centered around city planning across the Southern California region.

The Frank Gossette Endowed Scholarship is an amazing opportunity for Geography students earning their master’s to begin their own research program and contribute to the field just as Frank Gossette did before them.