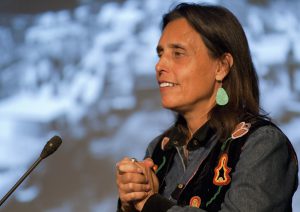 The Department of Women’s, Gender and Sexuality Studies along with the American Indian Studies Program welcomed Winona LaDuke (Anishinaabe) to speak on campus Thursday, April 23rd. LaDuke is one of the nation’s leading voices on environmental issues, sustainable development, climate change and food security as well as Native American and women’s issues.

The presentation kicked-off with LaDuke sharing a video called, “Honor the Earth: Triple Crown of Pipeline Rides,” which highlighted the Anishinaabeg tribes’ ride against the proposed expansion of the Alberta Clipper pipeline in northern Minnesota, in September 2013. LaDuke is passionate about preserving the indigenous way of life that oil companies threaten to destroy.

“We were told by our ancestors that we have a choice,” LaDuke began, “between two paths—one of scorched earth and the other green. It is our choice right now which road we take for the years to come.” LaDuke is referring to the extreme methods of oil extraction, such as oil fracking, that oil industries are utilizing for pure monetary gain.

LaDuke believes that there are three major problems at fault, which could eventually destroy our ecosystem if we don’t correct our behavior, and fast:

Climate Change is one such crucial factor. The number one causality of climate change is due to coal fire power plants, which emit massive amounts of CO2 into our atmosphere. According to greenpeace.org, “Governments across the world are allowing the industry to spend hundreds of billions of dollars to build hundreds of new coal-fired power stations worldwide in the coming years. If they are built, CO2 emissions from coal are expected to rise 60 percent by 2030.” We’re spiking the temperatures because of the increased amounts of CO2 in the atmosphere, and we need to keep global temperature rise below 2ºC, or the results will be devastating.

We could face an influx of natural disasters, such as widespread drought, flooding and massive population displacement caused by rising sea levels (greenpeace.org). Once this CO2 goes into the atmosphere, it travels into our oceans and the carbon dioxide acidifies our water. “Our oceans are literally on acid,” LaDuke said to a stunned audience. The majority of the world relies on the ocean as a food source and the increased acidity is contaminating our waters. Insurance companies predict that we’ll spend 20% of world GEP on climate-related disasters in next the 5 years. No city, no county, no tribal government, or federal government is preparing for the cost or implications of climate change.

The second major problem our ecosystem faces is the damaging effects of fossil fuels. “I’m a product of the fossil fuel era,” said LaDuke, “and I’ve had a pretty good time benefitting from it’s advantages, but it’s time to change.” We are massive consumers of fossil fuels and the system is set up to make users addicted to electricity, gasoline for cars, cell phones, etc., which becomes an endless cycle of consumption. LaDuke said, “We get stressed out if we don’t have access to these necessities. We feel entitled to them.” LaDuke points out that we are structurally set up to be highly-inefficient. We are wasting 57% of our power from the point of origin to the point of consumption, from power line to outlet. “We have become structurally dependent on energy companies who profit from our continued need to consume more energy, not less,” said LaDuke.

LaDuke uses the metaphor of “addicts” to describe societies’ behavior when it comes to energy consumption. “Our state and federal policy is entrenched with dealers in the form of oil and energy companies. These are the people who are writing our public policy.”

Oil fracking was the main extreme behavior on LaDuke’s agenda for the evening. Oil fracking is not a low-impact activity; it involves drilling horizontally and then vertically into the bottom of the ocean, pumping sand and a mystery solution comprised of 750 chemicals, and then exploding said mixture into the earth’s bedrock to extract oil and asphalt. The fracking industry is not required to disclose the 750 chemicals they utilize during this extreme process, and they are exempt from every major environmental law in the U.S., such as the Clean Air Act, Clean Water Act, and the Safe Drinking Water Act. “Oil fracking companies propose to take water out of the ocean, contaminate it, and then re-inject under the hopes that what goes down does not come up. That’s an iffy geological proposition after you’ve cracked the earth’s bedrock. That’s not a safe-bet.”

A few of LaDuke’s solutions to the myriad of problems we face include: reducing our carbon footprint at the local level, by investing in solar panels, which can save homeowners 25% of the energy costs;LaDuke also suggests growing our food locally and re-structuring our food economy, instead of relying on outsourced products. She uses the example of urban farmer, Will Allen, who grows a million pounds of food on the three acres of land in the heart of New York City. “If he can do it, we can do it,” said LaDuke. Awareness of the problems at the national level is crucial and we need to enact these proposed solutions. LaDuke states that you don’t have to protest, but you do have to get involved and let your government know that you’re not okay with what they’re doing.

LaDuke had this to say about the global-scale situation, “We face these issues as a result of the fossil fuels era—and while we’ve had a great time, we need to want a graceful exit. I don’t want to explode my way out. I don’t want to combust my way into oblivion or contaminate my entire ecosystem. We need to know when it’s time to bow-out and gracefully exit.”