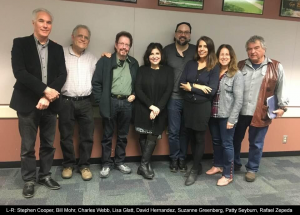 Stephen Cooper earned his M.F.A. from the University of California, Irvine and his Ph.D. from the University of Southern California. His short stories and articles on literature and film have appeared widely and his honors include an NEA Creative Writing Fellowship and CSULB’s Distinguished Faculty Scholarly and Creative Activities Award. He is the editor of Perspectives on John Huston and co-editor of John Fante: A Critical Gathering. While researching and writing Full of Life: A Biography of John Fante, he discovered and edited the manuscript of Fante’s last book, The Big Hunger: Stories 1932-1959. His work on Fante has appeared in multiple American, British, French, Italian, Dutch, and German venues. Both his biography of Fante and his edition of The John Fante Reader were named among the Los Angeles Times Best Books of the Year. Branching out into film, he co-wrote and produced the 2018 Netflix Original Documentary Struggle: The Life and Lost Art of Szukalski. His latest book, coedited with Clorinda Donato, is John Fante’s ‘Ask the Dust’: A Joining of Voices and Views (Fordham UP, 2020).

Lisa Glatt earned her M.F.A. from Sarah Lawrence College. She is the author of the novels The Nakeds, A Girl Becomes a Comma Like That, and the short story collection The Apple’s Bruise. Her poetry collections include Shelter and Monsters & Other Lovers. Lisa’s work has appeared in such magazines as Zoetrope, Mississippi Review, Columbia, Indiana Review, Pearl, and Gulf Coast.  With her colleague and friend Suzanne Greenberg, Lisa has written two children’s novels (Abigail Iris: The One and Only and Abigail Iris: The Pet Project), both published by Bloomsbury/Walker.

Suzanne Greenberg is the author of the novel Lesson Plans, a Library Journal Editors’ Pick. Her collection of short stories, Speed-Walk and Other Stories, was the recipient of the Drue Heinz Literature Prize and a finalist for the John Gardner Fiction Book Award. She is the co-author of Everyday Creative Writing: Panning for Gold in the Kitchen Sink. With colleague Lisa Glatt, she co-authored the children’s novels, Abigail Iris: The One and Only and Abigail Iris: The Pet Project. Suzanne received her M.F.A. from the University of Maryland. In addition to her books, her creative work has appeared in numerous publications, including Cimarron Review, Mississippi Review, West Branch, The Washington Post Magazine and The Sun.

David Hernandez’s most recent collection of poetry is Dear, Sincerely (University of Pittsburgh Press, 2016). His other books include Hoodwinked, Always Danger, and A House Waiting for Music. David has been awarded an NEA Literature Fellowship, two Pushcart Prizes, the Kathryn A. Morton Prize, and the Crab Orchard Award. His poems have appeared in Field, Harvard Review, Kenyon Review, New England Review, Ploughshares, Poetry, Southern Review, and The Best American Poetry. David is also the author of two YA novels, No More Us for You and Suckerpunch, both published by HarperCollins.

Bill Mohr has a Ph.D. in Literature from the University of California, San Diego. His first poem was published by Fuse magazine in San Diego in 1972. Since then, in addition to a dozen anthologies (including one in Japanese), his poems have appeared in a multitude of magazines, among which are 5AM, Antioch Review, Blue Collar Review, Blue Mesa Review, Caliban (on-line), Invisible City, KYSO, Miramar, OR, Santa Monica Review, Skidrow Penthouse, Sonora Review, Upstreet, and ZYZZYVA. In 2015, Bonobes Editores in Mexico published an edition of his poems in English and Spanish, Pruebas Ocultas. His scholarly publications include a critically acclaimed literary history of Los Angeles, HOLDOUTS: The Los Angeles Poetry Renaissance 1948-1992 (University of Iowa, 2011). He also edited two major anthologies of Los Angeles poets, The Streets Inside: Ten Los Angeles Poets (1978) and Poetry Loves Poetry: An Anthology of Los Angeles Poets (1985). In 2015, he co-edited Cross-Strokes: Poetry between Los Angeles and San Francisco with Neeli Cherkovski. From 1972 to 1988 he was the editor and publisher of Momentum Press, the archives of which are at UCSD. In 2014 he received the George Drury Smith Award from Beyond Baroque in Venice, California, and in the summer of 2015, he recorded over ten hours of biographical material for the Oral History Project at UCLA’s Special Collections. His current blog on poetry, culture, art, and politics (billmohrpoet.com) receives over 25,000 hits a month. A fully engaged academic, he frequently gives papers at conferences such as MLA, PAMLA, and the ALA.

Patty Seyburn’s fourth collection of poems, Perfecta, was published by What Books Press in fall of 2014. Her third book, Hilarity, won the Green Rose Prize given by New Issues Press (Western Michigan University, 2009). Her two previous books of poems are Mechanical Cluster (Ohio State University Press, 2002) and Diasporadic (Helicon Nine Editions, 1998), which won the 1997 Marianne Moore Poetry Prize and the American Library Association’s Notable Book Award for 2000. Her work has appeared in numerous anthologies, most recently The Bloomsbury Anthology of Contemporary Jewish American Poetry, Poetry in Michigan/Michigan in Poetry, and Irresistible Sonnets. Her poems have appeared in numerous journals including The Paris Review, Poetry, New England Review, Field, Slate, Crazyhorse, Cutbank, Quarterly West, and Boston Review. She won a 2011 Pushcart Prize for her poem, “The Case for Free Will,” published in Arroyo Literary Review. Seyburn grew up in Detroit. She earned a BS and an MS in Journalism from Northwestern University, an MFA in Poetry from the University of California, Irvine, and a Ph.D. in Poetry and Literature from the University of Houston. She is an Associate Professor at California State University, Long Beach and co-editor of POOL: A Journal of Poetry (www.poolpoetry.com).

Charles Harper Webb, M.F.A., Ph.D. has published eleven books of poetry, including Reading the Water, Liver, Tulip Farms & Leper Colonies, Hot Popsicles, Amplified Dog, Shadow Ball: New and Selected Poems, and What Things Are Made Of. His latest collection, Brain Camp, was published in 2015 by the University of Pittsburgh Press. A Million MFAs Are Not Enough, a collection of essays on the craft of poetry, was published in 2016 by Red Hen Press. Webb’s awards in poetry include the Morse Prize, the Kate Tufts Discovery Award, the Felix Pollock Prize, and the Benjamin Saltman Prize. His poems have appeared in many distinguished journals and anthologies, including American Poetry Review, Paris Review, Iowa Review, Ploughshares, Kenyon Review, Tin House, Poets of the New Century, Best American Poetry, and The Pushcart Prize. A former professional rock musician and psychotherapist, he is the editor of Stand Up Poetry: An Expanded Anthology, and recipient of a Whiting Writer’s Award, a fellowship from the Guggenheim Foundation, the CSULB Distinguished Faculty Teaching Award, and the CSULB Distinguished Faculty Scholarly and Creative Achievement Award.

Rafael Zepeda received his M.F.A. from the University of Oregon. His books include the novel Desperados, Horse Medicine & Other Stories, Tao Driver and Selected Poems, The Wichita Poems, The Yellow Ford of Texas, and The Durango Poems, among others.  His stories and poems have appeared in many national and international magazines and anthologies. He has received a National Endowment for the Arts Creative Writing Fellowship in Fiction, a California Artists’ Fellowship in Fiction, and a Poets, Essayists and Novelists Syndicated Fiction Award.