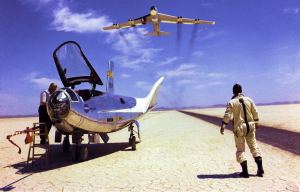 Southern California, a region known for palm trees, sunny beaches, automobiles, and Hollywood, owes much of its growth to aircraft production for the federal government. The Cold War Home Front in Southern California workshops explore the history and culture of aerospace production, a topic of immense importance for understanding the United States in the twentieth century.

The development of the “Sunbelt”—aerospace-driven economic growth, rapid demographic and suburban expansion, white cultural dominance in the midst of ethnic diversity, and expanding public higher education—is a national story. Postwar military-industrial production drove the US economy for several decades. No region experienced these trends as intensely as Southern California. Thus, the region offers the archetypal model of aerospace development and its attendant social and cultural patterns.

Chronologically, Cold War Home Front begins in 1941, addressing the crucial World War II roots of Sunbelt dynamics. Most of the workshop focuses on the classic Cold War space age of the 1950s. The workshop concludes in 1981, with the development of a reusable orbiter “space shuttle,” which represented the zenith of government-industry partnership and aerospace technology.

Thematically, the workshop moves from political and economic considerations of the aerospace industry to cultural and social implications. Cold War Home Front begins with a discussion of the aerospace industry both locally and nationally, and then moves to consider the experiences of engineers, managers, and factory workers with particular attention to issues of race, class, and gender. It then turns to the impact of the industry on demographic and housing patterns, as well as popular culture.

This workshop provides a model of professional development combining these elements:

Participants receive a $1200 stipend to help cover travel expenses to and from the project location, books, and living expenses. $420 will be automatically deducted for housing costs.

Deadline to submit application is March 1, 2016

For more information about the program, including application instructions, please access the tabs on the left.

Any views, findings, conclusions, or recommendations expressed in this program do not necessarily represent those of the National Endowment for the Humanities.