Balboa Amusement Producing Company (1913-1918), located at the same site as the preceding California Motion Picture Manufacturing Company (1910-1913), included the following milestones between 1913 and 1918. After 1918, movies at the same site were made by various companies, and the Long Beach studios continued to be called the “Balboa Studios” after changing hands in 1918 till 1922, the year the last movie was made at the site. Though H. M. Horkheimer considered returning to run the studios in 1922, he never returned and the studio was finally demolished in 1925.

October 1, 1913:  On April 28, 1913, Balboa had signed a contract with Jack London to allow the studio to make film versions of his novels; in fact, Balboa was the first studio ever to produce movies based on London’s work.  However, London decided to challenge copyright laws and sued Balboa for “unlawful” use of his publications.  At the time, authors had no copyright protection with films based on their works. London was testing the limits of copyright laws and won. By suing Balboa, London was able to extend author rights, while founding the Authors’ League of America, and this court case with Balboa influenced Congress to change copyright laws in favor of writers.

May 27, 1914:  Balboa confirmed one of the biggest producer-distributor alliances in the silent era—Balboa would become the sole film producer for William Fox, the greatest film distributor in the Americas.  Before Fox created Fox Films, he decided in 1914 only to distribute movies from Balboa Studios, handling exclusively its entire output for the film markets of the U.S., Canada, and Latin America, with Balboa Studios putting out more than 300,000 feet of positive print per week for Fox.  At the same time, Balboa signed a contract with Bishop, Pessers, and Co., Ltd., their exclusive British distributor, to provide the same amount of film distribution in Europe. In 1915, Fox established his own film producing company, Fox Films, but his administrative partnership with Balboa Films would continue.

June 16, 1914:  Running full blast, Balboa had three shifts per day. By 1916, there were as many as ten independent production companies making movies concurrently on the lots of Balboa any given day.

August 29, 1914:  Independent American distributors challenged the Edison Trust and met in New York to incorporate the National Independent Motion Picture Board of Trade of which H. M. Horkheimer (Balboa Studios) was vice-president and one of the three directors, led by William Fox. In 1915, this independent alliance defeated Edison’s monopoly in the courts, a victory for all film studios in the U.S. Consequently, William Fox and Balboa maintained and shared administrative staff both in New York and Long Beach, another overlooked, rediscovery chapter yet to be written.

September 5, 1914:  Percy DeGaston, cameraman at Balboa, devised a new compound, providing enough actinic light to film night scenes.  The Balboa film, An Eye for an Eye, copyrighted January 1915, was the first movie in the world to use night photography successfully.

September 6, 1914:  The New York Telegraph reported a breakthrough at the Balboa Studios, a new process devised by their chief chemist, Robert Brotherton, for tinting and toning three-exposure scenes.

October 1914:  Balboa became one of the first American studios to sign a contract with Pathé Frères. The giant French company distributed Balboa films through its international outlets—Europe, Asia, Australia.

January 1916:  Balboa stored over 100,000 props on site, the first studio in the industry to catalogue and reuse film properties on such a vast scale. 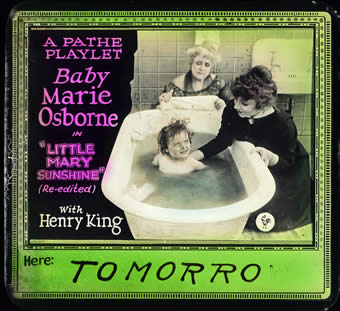 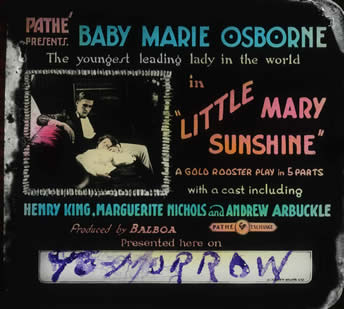 March 3, 1916:  Balboa released Little Mary Sunshine with Baby Marie. This movie launched a new genre, the family film, breaking all records for five-reel photoplays. Pathé contracted with Balboa to make six features with Baby Marie, co-starring Henry King. As a family film, it was the first time a juvenile actor played the leading part in a feature film paired with a leading man. This new genre, created by Henry King at Balboa, was later adopted by Chaplin with Jackie Coogan but is usually associated with Shirley Temple. 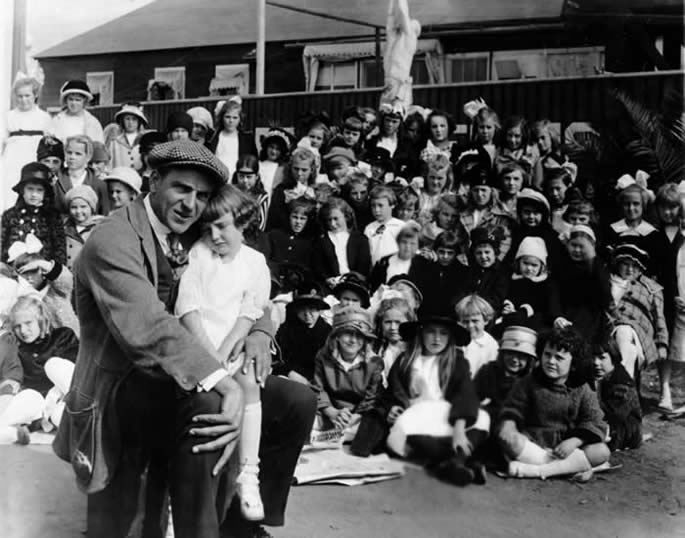 Henry King holds Baby Marie whom he launched to stardom during a publicity shot with children visiting the Balboa Studios (courtesy of Marc Wanamaker).

A Cast of Thousands:

July 17, 1916:  The first episode of 14 was copyrighted for the serial The Grip of Evil.  This was a grandiose production, with Balboa hiring the services of about 7,000 extras.  The serial starred Jackie Saunders, “The Maid of Long Beach” and the West coast rival of Mary Pickford.

December 1916:  Of the six American feature films selected that year by Pathé to be hand-colored in Vincennes (Paris), five were Long Beach productions.  This select few indicates the exceptional quality of Balboa films, since Pathé’s hand-coloring process, available only at Vincennes, was costly.

Pulling Out the Stops: 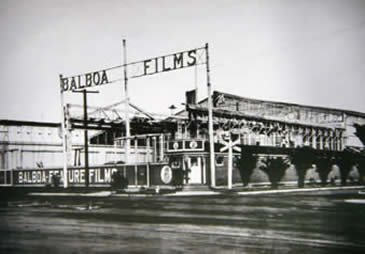 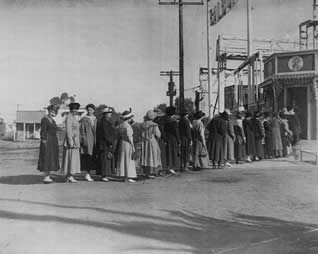 1917:  The film industry of Long Beach had become the biggest employer and tourist attraction in Long Beach.

Attracting the Best (to mention  a few):

1913: Harold Lloyd made his first movie appearance as an extra at the Long Beach plant. 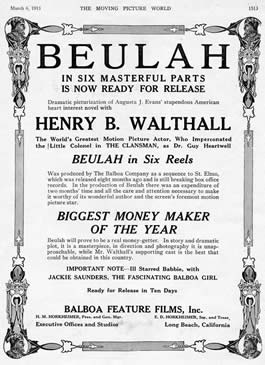 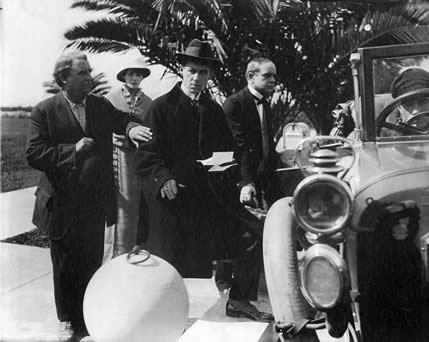 1915: Henry Walthall, star of D. W. Griffith’s Birth of a Nation, became the highest paid actor ever employed at Balboa, receiving $1000 a week, the equivalent of the average annual income in the U.S. Walthall starred in two movies at Balboa that year: Beulah and Birth of a Man.

March 1917:  The Horkheimers built the world’s largest glassed-in studio to entice Fatty Arbuckle to leave New Jersey/New York and produce his movies in “Hollywood by the Sea”—Long Beach.

October 26, 1917:  Variety praised Who Is “Number One?” Balboa had spared no expense with sumptuous sets. This was Paramount’s first serial production, and Paramount had to rely on the expertise of Balboa, the movie having been written, directed and filmed by Balboa staff and team of international technicians. 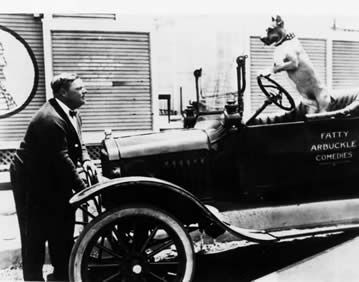 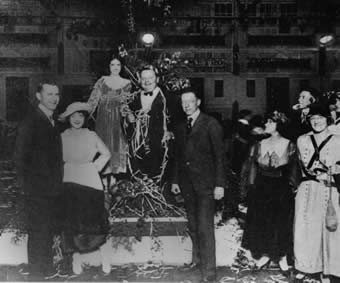 Photo at left: Roscoe Arbuckle with his dog Luke at Balboa garages; photo at right: Balboa’s welcome party to Arbuckle who moved his Comique Films to Long Beach in 1917 (courtesy of Marc Wanamaker).

February 1918:  Charlie Chaplin was photographed all around Arbuckle’s set during one of Chaplin’s three visits to Balboa, while studying Balboa’s efficient plant management for Chaplin’s newly formed United Artists with his business partners, Mary Pickford and Douglas Fairbanks. 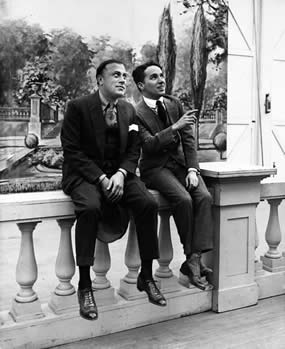 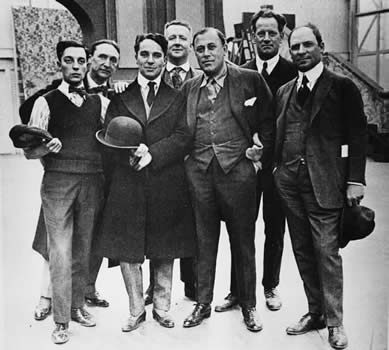